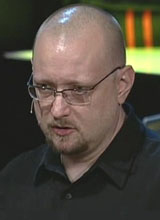 Selected by Foreign Policy magazine as one of their Top 100 Global Thinkers, Jamais Cascio has explored the intersection of environmental dilemmas, emerging technologies, and cultural evolution for over 20 years, specializing in plausible scenarios of the future. His work focuses on the importance of long-term, systemic thinking, emphasizing the power of openness, transparency and flexibility as catalysts for building a more resilient society. In 2010, he was named a Distinguished Fellow at the Institute for the Future, and continues to work with them on a wide array of projects.

Cascio’s written work has appeared in the New York Times, the Atlantic Monthly, and Foreign Policy, among many others. He has regularly featured commentaries in New Scientist magazine. Cascio has been featured in multiple film documentaries and television science shows discussing social, technological, and environmental futures, including National Geographic Television’s global warming program SIX DEGREES, the 2010 Canadian Broadcasting Company feature, SURVIVING THE FUTURE, and the 2013 independent film FIXED: THE SCIENCE/FICTION OF HUMAN AUGMENTATION.

Cascio speaks about future possibilities around the world. Recent appearances include the first Global Climate Engineering Conference in Berlin, the World Bank Understanding Risk conference in Venice, and the Asia Environmental Innovation Forum in Shenzhen. He was a featured speaker at the TED 2006 conference, “The Future We Will Create,” in Monterey, California, and at the 2014 TEDx Marin event.

In early 2009, he released his first book, Hacking the Earth: Understanding the Consequences of Geoengineering. The subsequent year, he was invited to present on the subject at the National Academies of Sciences in Washington, DC.

What do we do if our best efforts to limit the emission of greenhouse gases into the atmosphere fall short? According to a growing number of environmental scientists, we may be forced to try an experiment in global climate management: geoengineering. Geoengineering would be risky, likely to provoke international tension, and certain to have unexpected consequences. It may also be inevitable. Environmental futurist Jamais Cascio explores the implications of geoengineering in this collection of thought-provoking essays. Is our civilization ready to take on the task of re-engineering the planet?