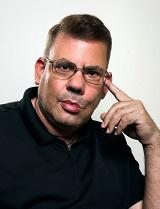 Jeff Gomez is the world’s leading sci-fi and fantasy world designer. As CEO of Starlight Runner Entertainment, he has the greatest job in the universe: he designs the mythologies of some of the biggest blockbuster story worlds in all of pop culture, and helps to extend them across multiple media platforms.

As the most renowned Transmedia Producer in the entertainment industry, Jeff has worked on blockbuster movies, hit videogames, major toy brands, and theme park attractions. He also serves as an advisor and consultant on global trends in technology, youth culture, and social media to visionary filmmakers, studio heads, publishers, licensing agencies, C-suite executives, and government leaders.

Jeff’s proprietary transmedia methods have also been applied to educational and geopolitical causes, accelerating positive self-organized social movements and increasing resistance to crime, violence, and corruption. Through applications of his Collective Journey and transmedia population activation models, Jeff has helped optimize communications for large non-profits such as World Vision, and address crises in Mexico, Colombia, Australia, and the Middle East North Africa region.

Growing up on the rough streets of New York City, Jeff has always championed the causes of young people. His Never Surrender! seminars teach kids how to deal with bullies, and he regularly provides career counseling to imaginative and neurodiverse teens and young adults who are facing challenges in life.