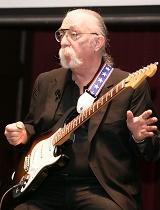 Remember when Elvis asked Nixon if he could be in the DEA? A rock musician with high-level security clearance – ridiculous. Unless, of course, you are able to outthink our nation’s enemies with “steely” resolve, experience and strategies. Only one such musician/national security consultant has the confidence and talent to step onto this world stage: Steely Dan co-founder, Jeffrey Baxter.

You may be asking, how in the world does a rock musician wind up as a national security expert? As it happened, it only took a few issues of Aviation Week magazine to peek Jeffrey’s interest in military technology and missile defense systems in particular. He became self-taught in this area, as many geniuses do, and then wrote a paper that proposed converting a ship-based anti-aircraft missile system into a rudimentary missile defense system. He passed on this paper to a local congressman, and his career as a defense consultant began. A consultant to the Department of Defense with a high-level security clearances in the Pentagon, he now advises top military and civilian groups on asymmetrical warfare, next-generation technologies and unconventional strategies.

Baxter believes that it was an unconventional approach to thinking about terrorism, coupled with a keen interest in technology that led to his recruitment by the government. “Conventional thought assumed that record turntables were for playing records until rappers began to use them as actual musical instruments, and we thought civilian airplanes were for carrying passengers and cargo until terrorists realized, by substituting a complicated and expensive inertial guidance system with a human zealot, they could be re-configured into a very effective cruise missile,” Baxter has said. “My approach has been to look at existing technologies and try to envision other ways they can be applied, which happens in music all the time and happens to be what terrorists are incredibly good at, as well.” Having the ability to leverage the ability to improvise in your thinking is essential to finding answers to the unconventional crises of today. In this way, his thought process is akin to jazz, where one must think on their feet and and operate in a non-linear, real-time environment consisting of rhythms, lyrics, chords, melodies and human interaction. At one time, with his rock n’ roll hairstyle and horseshoe moustache, Baxter certainly caused a few double-takes in the corridors of the Pentagon. However, as Baxter will tell you, “Eventually you have to walk the walk and be relevant to stay in the game.”

In addition to being a consultant with dynamic ideas, Baxter was the Grammy Award-winning guitarist for The Doobie Brothers and one of the founding members Steely Dan. He successfully brings his creativity and passion for music to his work today, generating and crafting a unconventional set of ideas, concepts and methodologies that have been recognized as highly effective game-changers for the business and student groups he advises. Baxter highlights creative, unconventional problem-solving and planning techniques by showing audiences how to apply knowledge gained in one area to advance goals in completely different fields. He explains how to approach issues with new “logic templates” and how to leave preconceptions behind. Through humor and lateral thinking, Baxter helps corporations and colleges map effective strategies, rediscover the drive to innovate and ignite passion in careers – both collegiate and corporate.

National Security:
Jeffrey “Skunk” Baxter is currently a consultant/contractor for a number of US Government agencies and advises top military, government and civilian groups on missile defense, terrorism & counter-terrorism, cyber-warfare, intelligence, virtual reality, war gaming, next-generation technology and unconventional strategies. He is a Senior Fellow and member of the Board of Regents at the Potomac Institute for Policy Studies, a member of the Director’s Strategic Red Team at MIT/ Lincoln Laboratories, a consultant for the Global Security Sector of the Lawrence Livermore National Laboratory and a Senior Thinker for the Institute for Human & Machine Cognition, as well as holding consulting agreements with SAIC, Northrop-Grumman, Parsons, RadiantBlue Technologies and PricewaterhouseCoopers. He was a Specialist Reserve Officer with the Anti-Terrorist Division of the Los Angeles Police Dept. for 15 years and a founding member of the Terrorism Early Warning Group, Los Angeles Sheriff’s Department. Baxter has appeared on CNN and Fox News and written on the subjects of national security and technology for the Wall Street Journal, Forbes, Wired, and Money Magazines.

Music & Media:
He has also had a long and successful career, (18 Gold & Platinum Albums, 2 Grammys), in the music and entertainment field as a founding member of the group Steely Dan, Grammy winning guitarist with the Doobie Brothers, as a record producer for such artists as Carl Wilson, Nazareth and The Stray Cats and studio musician for hundreds of recordings.