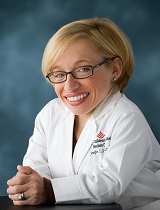 Dr. Jennifer Arnold is the co-star, along with her husband Bill, of the hit TV show “The Little Couple”, now in it’s 7th season on TLC. “The Little Couple” follows them as they embark on all the ups and downs of life together with their adopted children Will and Zoey.

Originally from Orlando, FL. Jen completed her undergraduate degrees in Biology and Psychology at the University of Miami before making a big move to the north. She moved to Baltimore, MD where she earned her medical degree at Johns Hopkins School of Medicine, a graduate of the Class of 2000. She then attended a Pediatric Residency Program at Children’s Hospital of Pittsburgh. During her fellowship in neonatology, she obtained a Master’s of Science in Medical Education from the University of Pittsburgh. She is Board Certified in both Pediatric and Neonatal Medicine.

She has spoken both nationally and internationally at venues such as the Texas Conference for Women, Shiners Hospital, March of Dimes and many more. She has received numerous awards including the Ray E. Helfer Award for innovation in medical education from the Academic Pediatric Association, Compassionate Doctor Recognition in 2010/2011 and Patients’ Choice Award for 2008-2014 and Top Ten Doctors 2012-2014 awards from Vitals.com. She is an active member of the American Academy of Pediatrics, Academic Pediatric Association, Society for Simulation in Healthcare and is on the council for the National Association of Children’s Hospitals and Related Institutions.

Jen is now a cancer survivor too! In her ‘nearly non-existent’ free time, Jen enjoys going to the beach, travel, painting, fishing and spending time with family & friends.

Bestselling authors of Life Is Short (No Pun Intended) and stars of TLC’s The Little Couple return with an inspirational book that encourages us to reach for our dreams, no matter what obstacles we may face.

Jennifer Arnold and Bill Klein have faced some big challenges in their lives. On the way to becoming a preeminent neonatologist and a successful entrepreneur—as well as parents and television stars—these two have faced prejudice, medical scares, and the uncertainty and daily pressures of life with special needs children. And even though they have dealt with fear, depression, hopelessness, and the urge to give up, they have found a way to persevere. Now they share their wisdom and encouragement with everyone who is facing their own challenges.

Life Is Short (No Pun Intended): Love, Laughter, and Learning to Enjoy Every Moment

From the beloved stars of TLC’s The Little Couple comes an uplifting and moving behind-the-scenes account of how the pair met, fell in love, and overcame huge obstacles to become successful professionals and parents.