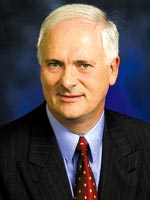 John Bruton was the EU Ambassador to the United States from 2004 to 2009, and previously the Irish Prime Minister.

As a former Irish Prime Minister (Taoiseach), John Bruton helped transform the Irish economy into the “Celtic Tiger”, one of the fastest growing economies in the world. During his time in office from 1994 to 1997, the Irish economy grew at an annual average rate of 8.7%. He was also deeply involved in the Northern Irish Peace Process leading to the 1998 Good Friday Agreement.

While Prime Minister, John Bruton presided over a successful Irish EU Presidency in 1996 and helped finalise the Stability and Growth Pact, which governs the management of the single European currency: the Euro. John Bruton represented the EU at Summit meetings with the President of the United States and with the Prime Ministers of Canada, Japan, China and Korea.

Before being appointed EU Ambassador to the United States in 2004, John Bruton served as a leading member of the caucus that drafted the first-ever European Constitution. He was Vice President of the European People’s Party from 1999 to 2005.

In May 2010 John Bruton was announced as the chairman of the newly-formed financial services body, IFSC Ireland. His main role will be to promote the Republic of Ireland as a location of choice for international financial services.

John Bruton was first elected to the Irish Parliament (“Dáil Éireann”) in 1969 at the age of 22 as a member of the Fine Gael Party, becoming Party Leader in 1990 and leading it into government in 1994. He previously served as Ireland’s Minister for Finance, Minister for Industry & Energy, and Minister for Trade, Commerce & Tourism.

Visions of the Atlantic Alliance: The United States, the European Union, and NATO

This volume reviews many of the highest priority issues faced by the United States and Europe, as well as the main institutions to which they belong: economic issues, the Middle East; the future of NATO and the European Union; the threat of nuclear terrorism and the proliferation of weapons of mass destruction; unfinished security business in Europe, including the status of Ukraine and Russia's evolution.