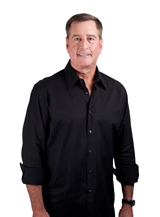 John Dennis is currently with WEEI Sports Radio 93.7 FM in Boston, most recently as the co-host of the “Dennis and Callahan Show”, a top-rated morning talk show from 6 to 10 AM Monday through Friday.

For 2 years, John hosted the Patriots All Access show on NESN TV.

John is very well known in the New England golf world. John was the host of the “Golf New England” show on the Fox NE Sports Television Network. He was also the host of “The Golf Show with John Dennis” on WEEI Sports Radio 850 during 1999.

In addition to being an avid golfer himself, for the past 20 years John has been an active participant and Master of Ceremonies at many New England celebrity and charity golf events and has been actively involved in several golf-event fund raisers for the Jimmy Fund and the Neely House.

Also, through his company “MediaWise”, John has coached several high-profile athletes and celebrities in public speaking and dealing with the media and the public.

John has been actively engaged as a speaker and Master of Ceremonies in numerous corporate events, awards banquets, and charity events.