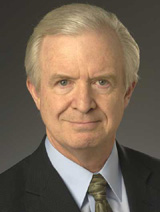 One of the key thought leaders to emerge in American Healthcare in the past decade, John J. Nance brings a rich and varied professional background to the task of helping doctors, administrators, boards, and front-line staff alike survive and prosper during the most profoundly challenging upheaval in the history of modern medicine. Having helped pioneer the Renaissance in patient safety as one of the founders of the National Patient Safety Foundation in 1997, his efforts (and healthcare publications) are dedicated to reforming American Healthcare from a reactive cottage industry to an effective and safe system of prevention and wellness. A lawyer, Air Force and airline pilot, prolific internationally-published author, national broadcaster, and renown professional speaker, John’s leadership is propelled by a deep commitment.

As a native Texan, John grew up in Dallas where he earned his Bachelor’s Degree and a Juris Doctor Degree from SMU, and is still a licensed Texas attorney. Named Distinguished Alumni of SMU for 2002, and distinguish Alumni for Public Service of the SMU Dedman School of Law in 2010, he is also a decorated Air Force pilot veteran of Vietnam and Operations Desert Storm/Desert Shield and a Lt. Colonel in the USAF Reserve, well known for his pioneering development of Air Force human factors flight safety education, and one of the civilian pioneers of Crew Resource Management (CRM). John has piloted a wide variety of jet aircraft, including most of Boeing’s line and the Air Force C-141, and has logged over 13,900 hours of flight time since earning his first pilot license in 1965, and is still a current pilot. He was a flight officer for Braniff International Airlines and a Boeing 737 Captain for Alaska Airlines, and is an internationally recognized air safety advocate, best known to North American television audiences as Aviation Analyst for ABC World News and Aviation Editor for Good Morning America.

Before joining ABC, John logged countless appearances on national shows such as Larry King Live, PBS Hour with Jim Lehrer, Oprah, NPR, Nova, the Today Show, and many others. He is also the nationally-known author of 20 major books, including the acclaimed WHY HOSPITALS SHOULD FLY (2009), which won the prestigious “Book of the Year” award for 2009 from the American College of Healthcare Executives.

John J. Nance has become one of America’s most dynamic and effective professional speakers, presenting riveting, pivotal programs on success and safety in human organizations to a wide variety of audiences, including business corporations and healthcare professionals. Together with fellow author Kathleen Bartholomew (Charting the Course and Ending Nurse-to-Nurse Hostility – Why Nurses Eat their Young and Each Other), the two of them are highly sought after for their watershed presentations to boards, senior leaders, physicians, nurses, and staff on Quality and Patient Safety. He is a pioneering and well-known advocate of using the lessons from the recent revolution in aviation safety to equally revolutionize the patient safety performance of hospitals, doctors, nurses, and all of healthcare. He lives in Friday Harbor, Washington

Why Hospitals Should Fly: The Ultimate Flight Plan to Patient Safety and Quality Care

"This book is a tour de force, and no one but John Nance could have written it. He, alone, masters in one mind the fields of aviation, health care safety, medical malpractice law, organizational sociology, media communication, and, as if that were not enough, the art of fine writing. Only he could have made sophisticated, scientifically disciplined instruction about the nature and roots of safety into a page-turner. Medical care has a ton yet to learn from the decades of progress that have brought aviation to unprecedented levels of safety, and, in instructing us all about those lessons, John Nance is not just a bridge-builder - he is the bridge. This book should be required reading for anyone willing to face the facts about what it will take for health care to be as safe as it truly can be." Donald M. Berwick, MD, MPP President and CEO Institute for Healthcare Improvement (IHI)

He took you on a collision course with disaster in Pandora's Clock. In the high-flying tradition of his extraordinary New York Times bestseller Pandora's Clock, author and aviator John J. Nance launches Medusa's Child, an explosive new thriller that takes to the skies-and takes you to the height of terror. Now he brings you to the brink of nuclear catastrophe. At 10,000 feet, Captain Scott McKay gets the nerve-shattering news: aboard his Boeing 727 is a ticking time bomb-and not just any bomb. It's the Medusa Project, a thermonuclear monster that could wipe out every computer chip on the continent, obliterating any and all traces of modern technology. Now Scott is flying blind, with nowhere to land and nothing to rely on but his own instincts. And one wrong move could ignite a worldwide apocalypse by unleashing...

There is no antidote for terror Captain James Holland is the pilot on a routine flight from Frankfurt to New York, packed with people eager to be home for Christmas. When a passenger collapses from what appears to be a heart attack, Holland is forced to request an emergency landing at London's Heathrow Airport. But to his great surprise, the air traffic controllers will not let him land in England -- they tell Holland that his sick passenger has contracted a dangerous new form of influenza and that the plane must return to Germany. But when German officials also refuse the landing, and other European countries follow suit, Holland begins to suspect that he's in much more trouble than anyone's letting on. In fact, his sick passenger is carrying a deadly virus accidentally released from a Bavarian laboratory, and it is feared that everyone on board is now infected. At the same time, someone with access to the CIA's computers wants to shoot the plane out of the sky, and there is a United States ambassador on board with powerful terrorist enemies who want to see him dead. While the panic on the ground spreads from the White House Situation Room to a small airport in the Ukrainian Republic, Captain Holland has only one concern: Where and when can he land? Pandora's Clock -- the most gripping, heart-stopping read of the year.

The year is 2009. For Kip Dawson, winning a passenger seat on American Space Adventure's spacecraft is a dream come true. But the thrill of the successful launch turns to terror when a micrometeorite penetrates the capsule, leaving the radios as dead as the pilot. With nothing to do but wait for his doomed fate, Kip writes his epitaph on the ship's laptop computer, unaware that an audience of millions is tracking his every word on the Internet. As a massive struggle gets under way to rescue him, Kip has no idea that his heroism in the face of death may sabotage his best chance of survival.

Blind Trust: The Revolution in Airline Safety: Coming to Grips with Human Failure

In graphic detail, this book demonstrates the havoc that has been wrought in the airline business in this country by the deregulation bill of 1978. Lower fares mean less income, and less income results in cost-cutting. The major carriers have pared expenses by eliminating flights to smaller cities, spurring the growth of many regional and commuter lines. Such lines, often economically marginal, shave their costs by hiring relatively inexperienced pilots, using inadequate or antiquated planes, and skimping on equipment maintenance all of which sacrifices passenger safety. While Nance, a lawyer and pilot, does not urge a return to the pre-1978 days, he recommends that the Federal Aviation Administration, as the industry watchdog, be given increased powers to control airline safety. Presenting even relatively technical information in terms of the people involved, Nance makes his case convincingly.