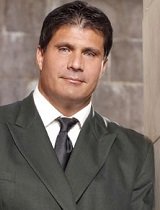 Jose Canseco was born in Havana, Cuba and made it big in the major leagues from 1985 to 2001. Canseco was selected in the 15th round of the 1982 MLB Draft by the Oakland Athletics and made his MLB Debut with Oakland in 1985. During his first year in the league he earned 1986 American League Rookie of the Year honors and went on to earn AL MVP honors in 1988. During his first seven seasons he led the American League in homeruns twice in 1988 and 1991, led the league in RBI in 1988, and helped the Athletics to a World Series title in 1989. From 1992 to 2001 he saw time with the Rangers, Red Sox, Athletics, Blue Jays, Devil Rays, Yankees and White Sox. During his decorated career he earned six All-Star selections and four Silver Slugger awards. While playing for the Yankees he earned a second World Series ring in 2000. Canseco is considered to be one of the best power hitters in MLB history.

Canseco has admitted using performance-enhancing drugs during his playing career, and in 2005 wrote a tell-all book, Juiced: Wild Times, Rampant ‘Roids, Smash Hits & How Baseball Got Big, in which he claimed that the vast majority of MLB players use steroids. Congressional hearings were held on the whole issue of steroid use in baseball, sparked in part by the buzz created by Canseco’s New York Times best- seller.

Since retiring from Major League Baseball, he has competed in boxing and mixed martial arts and other baseball leagues. He currently lives in Las Vegas, NV.

Vindicated: Big Names, Big Liars, and the Battle to Save Baseball

In this shocking memoir, Canseco sheds light on a life of dizzying highs and debilitating lows, provides the answers to questions about steroids that millions of fans are only now beginning to ask -- and suggests that, far from being a passing trend, the steroid revolution is only a taste of things to come. Who's juiced? According to Canseco's authoritative account, more than you think. And baseball will never be the same.