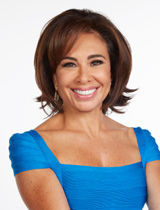 Jeanine Pirro currently co-hosts The Five on Fox News Channel. Previously she was the host of Justice with Judge Jeanine. She also serves as a legal analyst for FOX News Channel (FNC) where she provides legal insight across the network’s programming. She joined the network in 2006 and is based out of New York.

Prior to joining FNC, Judge Pirro was the host of a syndicated weekday court show distributed by Warner Brothers, for which she won an Emmy Award. Her notable legal career spans over 30 years. In 1975, she became an assistant district attorney for Westchester County, New York and was the first female to prosecute murder cases there. In 1990, Pirro was elected as the first woman to serve as a Westchester County Court judge.

In addition, Pirro started the first domestic violence unit in a prosecutor’s office in the country. In 1997, she was appointed by then-Governor George Pataki to chair the New York State Commission on Domestic Violence Fatality Review Board, whose research helped pass increased protection for domestic violence victims. The Republican Party chose her as its candidate for New York State Attorney Generalin 2006.

Liars, Leakers, and Liberals: The Case Against the Anti-Trump Conspiracy

Get the story the Fake News media doesn't want you to hear in the #1 New York Times bestseller: a withering indictment of the Deep State plot against Trump and a firsthand account of the real presidency, based on interviews with the Trump family and top administration officials.

To Punish and Protect: A DA's Fight Against a System That Coddles Criminals

Westchester County District Attorney Pirro, writing with Whitney, declares her hatred of violent crime and brutal criminals in this book of essays. After nearly 30 years as a prosecutor, Pirro sees herself at the center of a battleground of good vs. evil; she has no doubt of her rectitude. She and her assistants are the avengers who seek justice on behalf of crime victims, often ignored or marginalized by the criminal justice system. The book's chapters focus on the most horrific imaginable crimes, from sexual predation directed against children to spousal murder, from elder abuse to hate crimes. For each type of atrocity, Pirro cites examples drawn from her prosecutorial experience. Throughout, she empathizes with the victims and their families, comforting them and advocating expanded public services to help them heal. She also urges reforms of the criminal justice system, such as eliminating the insanity defense from the guilt phase of criminal trials and modifying the presumption of innocence so that bail can be denied to persons accused of heinous crimes. Pirro also favors the death penalty (although she decided not to seek it in 10 of 11 death-eligible cases she has handled as district attorney). This book serves several purposes: to stoke public consciousness of crime and contempt for criminals, to mobilize support for toughening the penal laws and to position the author as a remorselessly angry crusader. As she states, hers is an elected position, and a book such as this will serve the author well as campaign literature.

Westchester, New York, 1976-Cocaine abuse is rampant, the county courthouse is a boys' club, and men are still legally permitted to beat their wives. Enter Dani Fox, the feisty, ambitious twenty-five-year-old assistant district attorney tired of feeling like an outsider and hungry to bring abusers to justice. Dani confronts emotionally challenging crime scenes and uncooperative colleagues, facing threats to her safety-and even the safety of her pet pig, Wilbur-in order to protect society's silent victims. Spearheading the country's first domestic violence unit in a shifting legal landscape, Dani must find allies where she can, especially when she discovers a seemingly simple case has some shocking twists. But who can she trust, and which of her colleagues will she end up battling both in and out of the courtroom? Drawing from her own past as a dynamic, hard-charging former district attorney, Emmy-winning Judge Jeanine Pirro's debut page-turner is ripped from the headlines, full of gripping details, authentic thrills, and suspenseful realism that can only come from a courtroom litigator who's been in the trenches.

Prosecutor Dani Fox has handled some gruesome homicide cases, but her investigation into the brutal murder of a local Mafia capo's daughter goes from tricky to downright dangerous. Although the victim has ties to the New Jersey Mafia, she was also secretly engaged in an affair with someone from a rival New York crime family. As if squaring off against two powerful crime families weren't enough, Dani suspects that the murder is more than a simple crime of passion, and getting to the bottom of this grisly homicide puts Dani and her long-term boyfriend, Will, in harm's way. Clever Fox has you rooting for Dani in this deadly fight between the ace prosecutor and an elusive and dangerous killer.