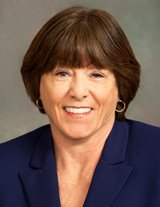 Daley spent more than 25 years as a front-line caregiver and staff nurse at Brigham and Women’s Hospital (BWH) in Boston. She practiced for more than 22 years in the BWH emergency department until January of 1999 when she left due to a needlestick injury that resulted in her infection with both HIV and hepatitis C. Since that time, she has been actively engaged on state, national and international levels as an advocate for use of safer needle devices in health care practice settings. Daley has traveled to more than 30 US states as well as Europe, Australia and Asia in her ongoing campaign to educate nurses, students, health care administrators and legislators on the importance of needlestick injury prevention. In recognition of the integral role she played in the passage of federal legislation to update the 1991 OSHA Bloodborne Pathogens Standard, Daley was among those invited to the Oval Office to witness President Clinton sign the “Needlestick Safety Prevention Act” into law on November 6, 2000.

During her four-year tenure as ANA president, Daley led and served as the spokesperson for the organization, which represented the interests of 3.1M registered nurses and included three subsidiaries with a $50M budget. During that time, she also spearheaded a major organizational transformation, initiating the most substantive changes made to ANA in over three decades that have resulted in significant overall growth for the organization. In 2011, while serving as ANA president, she was listed among Modern Healthcare’s “100 Most Influential People in Health Care” and, in 2013, was selected by Modern Healthcare as one of the “Top 25 Women in Healthcare.”

Daley has been recognized with numerous awards for her outstanding leadership and excellence in practice. Daley was honored as the recipient of the ANA Nursing Practice Award in 2000 and the Essence of Nursing Award at Brigham and Women’s Hospital in 1999. In 1999, she was also honored by physician colleagues in the Brigham Emergency Department as recipient of the first annual Karen A. Daley Emergency Medicine Residents’ Nursing Appreciation Award. In 2003, she was awarded the Gail Lenehan Award from the Emergency Nurses Association in recognition of her national advocacy on behalf of nurses. In 2006, she was recognized as a living nursing legend by the Massachusetts Association of Registered Nurses, and was inducted as a fellow into the American Academy of Nursing. In 2015, she was awarded an honorary Doctor of Humane Letters by Rivier University in Nashua, New Hampshire in recognition of her global public health advocacy and leadership and in 2017, received her second honorary Doctor of Humane Letters from Curry College in Milton, Massachusetts.