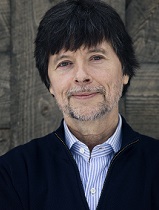 An award-winning documentary filmmaker, Ken Burns has directed film projects such as The Civil War, Baseball, The West, The War, and The National Parks: America’s Best Idea, all of which were developed for PBS. The late historian Stephen Ambrose said, “More Americans get their history from Ken Burns than any other source.” While The New York Times has called Burns “the most accomplished filmmaker of his generation.”

His documentary, The Tenth Inning, which first aired in September 2010, picks up where his 1994 epic Baseball left off and captures the ugly, dark side of major league baseball in the 1990s and how the rise of performance drugs has reshaped America’s national pastime.

An eloquent keynote speaker, Ken Burns always address what we share in common, not what divides us. He discusses his famous celebrated documentary films, The National Parks, The Civil War, Baseball and Jazz, reveals the leadership models in the unexpectedly dramatic story of Lewis and Clark, delves into the complete and often contradictory lives of great American figures including Thomas Jefferson, Frank Lloyd Wright, and Mark Twain, and celebrates the achievements of the common soldier in The War.

“There is too much ‘pluribus’ these days,” Ken Burns says, “and not enough ‘unum.’ I’m in the business of ‘unum.'” He does this in his films, of course, but also in his equally acclaimed and riveting speeches before business and community audiences. Great oratory has all but disappeared from our public discourse, so it is indeed refreshing to have Burns remind us…words matter.

The War - A Film By Ken Burns and Lynn Novick

The War, a seven-part series directed and produced by Ken Burns and Lynn Novick, tells the story of the Second World War through the personal accounts of a handful of men and women from four quintessentially American towns. The series explores the most intimate human dimensions of the greatest cataclysm in history -- a worldwide catastrophe that touched the lives of every family on every street in every town in America -- and demonstrates that in extraordinary times, there are no ordinary lives.

Ken Burns tops himself with this epic of American history, told in "nine innings," with a skilled narration by John Chancellor and the voices of Paul Newman, Jason Robards, Billy Crystal, and other stars. The series spans 150 years, starting with the myth-debunking tale of baseball's true beginnings -- when it was a game "one degree above mayhem." Then follow the growth of America's National Pastime through the decades of glory and record-setting achievements, as well as the scandals, the bigotry, and the big money. The series portrays the game as a mirror of America itself -- the passions, prejudices, and ambitions that have shaped the country.

Hailed as a film masterpiece and landmark in historical storytelling, Ken Burns's epic documentary brings to life America's most destructive-- and defining--conflict. With digitally enhanced images and new stereo sound, here is the saga of celebrated generals and ordinary soldiers, a heroic and transcendent president and a country that had to divide itself in two in order to become one.