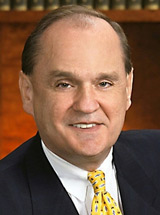 Ken Futch is president of his own Atlanta-based training company that teaches organizations and individuals how to turn opportunity into success.

Before founding his company in 1986, Ken Futch was in sales and management with AT&T, where he was recognized for being the top revenue producer in a group of 6,000 salespeople. Ken Futch‘s success led to his selection as a top trainer at AT&T’s prestigious National Sales School.

Ken Futch is a native of the “Tar Heel” state and is a graduate of the University of North Carolina at Chapel Hill. Ken Futch was commissioned as a lieutenant and served three years in the U.S. Army, including a tour in Vietnam as a combat platoon leader.

A past president of the Georgia Speakers Association and a former Toastmasters International humor champion, Ken Futch delivers more than 100 high-impact programs annually. Ken Futch has now trained over 100,000 people in seminars presented throughout North America and Europe.

Ken Futch is the author of the book Take Your Best Shot, which is filled with priceless insights and stories about recognizing and achieving opportunities in life.

A passionate believer in lifelong learning, Ken Futch has continued his own development by earning the designation of Certified Speaking Professional (CSP) from the National Speakers Associationâ€”a five-year educational and experiential process.

Are you ready? Ken Futch is about to turn a bullet in his head into a shot in your arm. With a remarkable ability to extract the moral from every story, he makes you think, chuckle—and take notes. You’ll never see your world in the same way again. Ken’s background prepared him well to be one of America’s most applauded motivational trainers. "It’s said the best teachers draw on their failures," he says, "so I’m uniquely qualified. I’ve had a bunch of them." More than once he’s watched his best-laid plans backfire, leaving him bleeding, bruised, or beaten up — but wiser for the experience. Each painful situation turns into a life lesson told with insight and humor. Here are just a few things you’ll discover in Take Your Best Shot: Which battlefield lessons can save your career; How to set your sights on "the money shot;" When to "pull the trigger" to maximize a situation; Why complaining about bad times might misfire; How to focus on your feedback thermostat; How to ricochet a minor opportunity into a major success. Ken Futch gives you all the ammunition you need to make significant changes in your life and career right now. Read any chapter and you’ll come away with a load of ideas that will aim you toward the top every time you take your best shot.