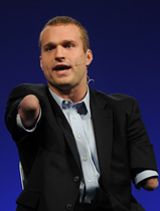 Kyle Maynard is a motivational speaker, author, entrepreneur and athlete. Despite being born with arms that end at the elbows and legs near the knees, Kyle’s wrestled for one of the best teams in the Southeast, set records in weightlifting, fought in mixed martial arts, and most recently became the first man to crawl on his own to the summit of Mt. Kilimanjaro, the highest mountain in Africa, which awarded him his 2nd ESPY for the Best Male Athlete with a Disability.

His story has been featured on The Oprah Winfrey Show, Larry King Live, ESPN’s Sportscenter, HBO’s Real Sports, ABC’s 20/20 and Good Morning America, and as a cover story in USA Today. He continues to inspire as the author of his book, No Excuses (2005), a New York Times bestseller.

He is the 2004 ESPY Award winner (Best Athlete with a Disability), and a year later was inducted into the National Wrestling Hall of Fame. In 2007, he was elected by the U.S. Jaycees as one of the Top Ten Outstanding Young Americans. In 2008, Maynard received the Highest Recognition Award of the Secretary of Health and Human Services for his efforts as a life role model, motivational speaker and humanitarian.

Since 2007 Maynard has traveled to five continents speaking for corporate meetings, grade schools, universities, and programs supporting injured American veterans. He’s shared the stage with the world’s greatest minds in business, politics, sports, and motivation. Whether he’s in front of a middle school classroom or thousands in a convention hall, Kyle says his life’s deepest passion is helping each audience on their path towards reaching their highest human potential.

In his most recent conquest, Kyle became the first man to ever hike on all fours to reach the roof of Africa — bearcrawling to the 19,340 ft. summit of Mt. Kilimanjaro. Joining Kyle were two inspiring veterans, former Marine officer Chris Hadsall and Army staff sergeant Sandra Ambotaite, who battled through incredible adversity of their own to reach the peak. The purpose of their quest — to send a message to the veteran community and kids with disabilities around the world that no obstacle is too great to be overcome.

No Excuses: The True Story of a Congenital Amputee Who Became a Champion in Wrestling and in Life

He was born a congenital amputee, his arms ending at his elbows and his legs at his knees. But that didn't stop Kyle Maynard from becoming a champion, on the wrestling mat and in his life. No Excuses is the inspiring story of Kyle's battle against the odds. You'll learn about the family who supported him, the coach who trained him, and the faith that strengthened him to face the toughest fights.