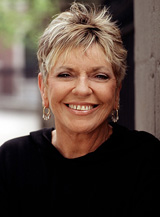 Linda Ellerbee is an outspoken journalist, award-winning television documentary producer, writer and anchor, best-selling author, breast cancer survivor, mom, grandmother and one of the most sought-after speakers in America.

Ellerbee began her career in 1972 at the Associated Press. In 1973, she was hired to be an on-air reporter at KHOU in Houston, Texas. Six months later, she was offered a job at WCBS, New York, as the “hard news” reporter for the 11pm newscast. In 1975, she moved to NBC (national) News where, as Congressional Correspondent, she spent years covering national politics. In 1982, she pioneered the late-night news program NBC News Overnight. Overnight was cited by the duPont-Columbia Awards as “possibly the best written and most intelligent news program ever.” In 1986, Ellerbee moved to ABC News to anchor and write Our World, a weekly primetime historical series. Her writing on Our World won her a national News & Documentary Emmy.

In 1987, Ellerbee and Rolfe Tessem, her partner, quit network news to start Lucky Duck Productions, a New York based company that produces news, documentaries and other specials for broadcast and cable. Lucky Duck Productions began by producing documentaries for PBS. Then, in 1991, Lucky Duck began producing Nick News for Nickelodeon. Ellerbee is Executive Producer, writer and anchor. Nick News is the longest running children’s news program in television history.

As a popular and versatile speaker, Ellerbee travels thousands of miles each year, inspiring audiences with her insight, while filling banquet rooms and concert halls with laughter. They come to hear her trademark wit and wisdom on everything from how to survive corporate America with your values intact to how to survive breast cancer and live to laugh about it (also, she often speaks to medical groups concerning healthcare from a patient’s point of view), and, in general, how to accept – even embrace – a changing world, perhaps even making a few changes yourself.   In 2011, Ellerbee was honored with the Lifetime Achievement Award for Children’s Television at the annual Banff International Media Festival.

Girl Reporter Blows Lid Off Town! (Get Real, No. 1)

Meet Casey Smith, girl reporter extraordinaire. Sniffing out news? Casey will Rollerblade through the principal's office to get a scoop. There's just one obstacle: the perky, popular, people-pleasing Megan O'Connor, whose idea of a good story is something that makes you feel gooey inside. And this is the kid Casey is supposed to team up with her to publish a school newspaper? Get Real.

The pressure is on Casey Smith, girl reporter extraordinaire, to uncover another knock-your-socks-off story. Then...wham! Casey stumbles on a cheating ring at school. Who's guilty? All clues point to super-girl Megan O'Connor. Can Casey and the Real News gang get Megan off the hook? Does she deserve to be unhooked? Get Real.

Take Big Bites: Adventures Around the World and Across the Table

In Take Big Bites, you will discover how chile con queso changed the course of American education; where in the world - and you will not, Linda swears, guess the answer - you go to find the best fried-egg sandwich; and why everybody should spend one month a year alone on an island far, far away. And if you go to Málaga? Watch out for the ham-and-cheese sandwich. Really. You'll see why.