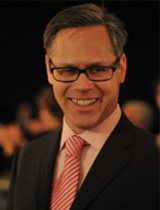 Matt Garcia is the director of the School of Historical, Philosophical, and Religious Studies at Arizona State University. He also directs the Comparative Border Studies Program. He previously taught at the University of Illinois, Urbana-Champaign, the University of Oregon, and Brown University. His book, A World of Its Own: Race, Labor and Citrus in the Making of Greater Los Angeles, 1900-1970 won the award for the best book in oral history by the Oral History Association in 2003. His most recent book, From the Jaws of Victory: The Triumph and Tragedy of Cesar Chavez and the Farm Worker Movement, won the Philip Taft Award for the Best Book in Labor History, 2013. Garcia was also the outreach director and co-primary investigator for the Bracero Archive Project, which was the recipient of a National Endowment for the Humanities Grant in 2008, and the recipient of the Best Public History Award by the National Council for Public History in 2009-2010. He was born in Upland, California and graduated from Damien High School in LaVerne. He completed his Ph.D. in History at the Claremont Graduate University in 1997.

Tracing the history of intercultural struggle and cooperation in the citrus belt of Greater Los Angeles, Matt Garcia explores the social and cultural forces that helped make the city the expansive and diverse metropolis that it is today. As the citrus-growing regions of the San Gabriel and Pomona Valleys in eastern Los Angeles County expanded during the early twentieth century, the agricultural industry there developed along segregated lines, primarily between white landowners and Mexican and Asian laborers. Initially, these communities were sharply divided. But Los Angeles, unlike other agricultural regions, saw important opportunities for intercultural exchange develop around the arts and within multiethnic community groups. Whether fostered in such informal settings as dance halls and theaters or in such formal organizations as the Intercultural Council of Claremont or the Southern California Unity Leagues, these interethnic encounters formed the basis for political cooperation to address labor discrimination and solve problems of residential and educational segregation. Though intercultural collaborations were not always successful, Garcia argues that they constitute an important chapter not only in Southern California's social and cultural development but also in the larger history of American race relations.

From the Jaws of Victory: The Triumph and Tragedy of Cesar Chavez and the Farm Worker Movement

From the Jaws of Victory: The Triumph and Tragedy of Cesar Chavez and the Farm Worker Movement is the most comprehensive history ever written on the meteoric rise and precipitous decline of the United Farm Workers, the most successful farm labor union in United States history. Based on little-known sources and one-of-a-kind oral histories with many veterans of the farm worker movement, this book revises much of what we know about the UFW. Matt Garcia’s gripping account of the expansion of the union’s grape boycott reveals how the boycott, which UFW leader Cesar Chavez initially resisted, became the defining feature of the movement and drove the growers to sign labor contracts in 1970. Garcia vividly relates how, as the union expanded and the boycott spread across the United States, Canada, and Europe, Chavez found it more difficult to organize workers and fend off rival unions. Ultimately, the union was a victim of its own success and Chavez's growing instability.