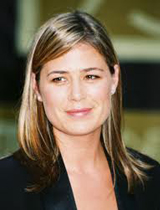 Maura Tierney was born on February 3, 1965, in Boston, Massachusetts. She was raised in Hyde Park by her father, Joe, an eight-term Boston city councilman and mayoral candidate, now a lawyer, and her mother, Pat, a real-estate agent.

Maura has two younger siblings, including a sister, Dierdre, for whom she acted as matron of honour when Dierdre married in 1998. Contrary to popular belief, Maura is not related to actress Gene Tierney or actor Lawrence Tierney.
Maura went on to attend New York University, but ended up six credits short of graduation. Maura Tierney also studied at the renowned Circle in the Square Theatre School.

While at NYU, she met filmmaker Richard Shepard, with whom she would become close friends with and appear in several of his writing/directing works: The Linguini Incident (her big screen debut), Mercy, Oxygen, and Mexico City (in a voice cameo). Some of the plays she performed in as a student include Come Back to the Five and Dime, Jimmy Dean, Jimmy Dean, Baby With the Bathwater, Danny and the Deep Blue Sea, Talking With, and Food. For a period of time, Maura lived in New York’s Hell’s Kitchen, at one point selling t-shirts door-to-door in college dorms. She eventually relocated to Los Angeles, where she landed an agent. Though she began booking roles, The Van Dyke Show, her first foray into series television, was cancelled after only two months, and her first lead in a feature film was in Dead Women in Lingerie, a project that is conspicuously absent from her official resume.

After several pilots and smaller film roles, Norman Lear cast Maura Tierney in his All in the Family spin-off 704 Hauser as the feisty Jewish girlfriend of a conservative black student. While the show was lauded by neither audiences or critics, it garnered considerable attention because of its origins and creator. The series was canceled after a mere 5 episodes, more than a year after the original pilot was shot, but within the next year, Maura Tierney became a last-minute hire for a pilot entitled The Station. The pilot would eventually become the critically-acclaimed sitcom NewsRadio, and, coupled with a supporting role in the movie Primal Fear, it succeeded in bringing Maura to the attention of the industry and greater public alike.

Maura married actor Billy Morrissette in 1993, to whom she is now divorced. The couple shared a black pug named Rose Kennedy. The two of them were at one point hired as co-stars on a sitcom starring Ralph Macchio, but found the whole thing so awful they were too happy to get fired. (Maura claims that she deserved it, he didn’t.) They also make a cameo together in the film The Thin Pink Line, which remains unreleased in North America. Morrissette went on to direct Maura in an independent film based on his own script, a Macbeth update entitled Scotland P.A.

After several appearances in high-profile films like Liar Liar, Primary Colors, Forces of Nature, Instinct, and the cancellation of NewsRadio, Maura joined the cast of one of the most popular dramas in television history, ER, where she stayed on until partway through the series’ final season. The show garnered her many an award nomination, including one for an Emmy. During these years, she also found the time to return to the New York stage, appearing in the off-Broadway plays Some Girl(s) and Three Changes.

In 2009, Maura Tierney was diagnosed with breast cancer. She underwent surgery and chemotherapy to remove the cancer, which was successful. Though she dropped out of the TV series Parenthood to attend to her health, she returned to work in 2010 with a role in the play North Atlantic and new episodes of Rescue Me, a show on which she had previously recurred.

Nowadays, Maura Tierney continues to maintain a high profile on TV, film, and stage. She was a regular cast member on NBC’s long-running series ER, the recent, more short-lived series The Whole Truth and has played major roles in the films Welcome to Mooseport, Insomnia, Finding Amanda, and Diggers, to name but a few. Maura returns to the stage in February and March of 2011 in an Irish production of the award-winning play God of Carnage.