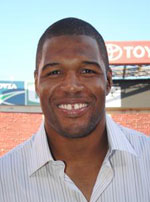 Super Bowl Champion Michael Strahan retired from the National Football League (NFL) in 2007 after completing his 15th season with the New York Giants and leading the team to their dramatic Super Bowl victory over the previously unbeaten New England Patriots. Michael Strahan had an outstanding 2007 season, as he was once again among the leaders in sacks and headed up one of the top defenses in the NFL.

Currently, Michael Strahan serves as a studio analyst on the NFL ON FOX, the number one rated NFL pregame show. Michael sits alongside Terry Bradshaw, Howie Long and Jimmy Johnson, and provides sharp analysis, humor, and a unique perspective on the topical issues in the game.

In 2006, Strahan suffered an injury which shortened a very promising season. In 2005, Strahan was once again among the leaders in total sacks, and earned his 7th trip to the Pro Bowl. Prior to a season-ending injury after the 8th game of the 2004 season, Strahan was a dominant force for the Giants’ defense. During the 2003 season he was named to his 6th Pro Bowl and led the NFL in sacks. In 2001, Strahan completed what is widely considered to be one of the greatest seasons ever for a defensive player, breaking the 18-year-old NFL single season sack record with 22.5 sacks. A perennial Pro-Bowler and charismatic leader of the New York Giants, Strahan was named the NFL’s 2001 Player of the Year by Paul Zimmerman of Sports Illustrated and the 2001 Defensive Player of the Year by the Associated Press, making him the first New York Giant to win the award since Lawrence Taylor. He is also one of only four players to lead the NFL in sacks for two season.

In the fall of 2009, Strahan tackled the world of scripted network primetime television as the star of BROTHERS, a new FOX series from Sony Pictures Television. The half-hour comedy centered around a former big shot (Strahan) who returns home for a chance to rebuild his relationship with his family, get his life back on track and prove you can go home again – even if it’s kicking and screaming. Daryl “Chill” Mitchell, Emmy nominated actress CCH Pounder and Carl Weathers star.

With a natural affinity for people and a effortless ease in front of the camera, Strahan has held hosting duties for several series: cable series “Pros v. Joes,” which pits amateur contestants against professional athletes in a series of athletic feats; the family cable show “Backyard Stadiums” on DIY Network where he and his co-host built outdoor recreational projects; YES Network show “Sack and Renovate” where he led a guided tour inside his 100-year-old home; and the kid-friendly show “Giants on Deck.”

Strahan is involved with many charitable organizations, donating hours and goodwill to numerous charities in the New York metropolitan area. Strahan has dedicated himself to helping abused and neglected youths in the greater New York area by raising funds through charity golf tournaments. Strahan is also a proponent of the New York Restoration Project, a charity organization founded by Bette Midler whose mission is the preservation of New York’s outdoor spaces. He supports several national charity organizations as well, including the Fresh Air Fund, the American Cancer Society, the Children’s Miracle Network, Housing Enterprises for the Less Privileged (H.E.L.P.) and the Starlight Children’s Foundation. Strahan was inducted into the Starlight Hall of Fame in recognition of his support of Starlight’s mission and programs.

Strahan was a vocal and visible leader among the athletic community in the aftermath of the World Trade Center tragedy. As the player representative for the Giants, Strahan led the charge in calling for the league to cancel their games following the event, and was also instrumental in the decision of the NFL Players Association for all NFL Players to donate one week’s pay to charity.

Born in Houston, TX, Strahan spent most of his youth in Germany where his father Gene was stationed in the U.S. Army before retiring in 1985 to enter private business there. Strahan returned to the U.S. for a portion of high school and was soon recruited to play football at Texas Southern University. As a senior at Texas Southern, Strahan was selected first team All-America by the Associated Press when he recorded 62 tackles with a school-record 19 quarterback sacks and 32 tackles totaling 142 yards in losses.

Inside the Helmet: Hard Knocks, Pulling Together, and Triumph as a Sunday Afternoon Warrior

Following a magical season that ended in Super Bowl glory, one of the NFL's biggest stars delivers a no-holds-barred, hardhitting hitting account of life in the league. Michael Strahan is one of the NFL's most talented players, and he is also one of the game's most vocal personalities. In Inside the Helmet, Strahan exposes all of the pressure, pain, and glory of life in the NFL, venturing into territory no previous football author has had the nerve to tread. Bringing the reader right into the middle of the action, Strahan recounts exhilarating victories and reveals the hair-raising details of the ruthless grit required for every win. He gives an honest account of the brutality on the field and the myriad injuries from which he continues to suffer. He describes the relationships among teammates (including an account of his well publicized feuding with Tiki Barber), the practical jokes players use to preserve their sanity and the violent blow-ups that occur when the pressure gets too intense, and the challenges of taking orders from head coach Tom Coughlin and his squadron of assistant coaches. Strahan also writes about dealing with the relentless media coverage, rabid and demanding fans, and the struggle to live up to a multimillion-dollar salary. Finally, in two new chapters for the paperback edition, Strahan writes about the ups and downs of a truly sensational 2007 season that saw the Giants overcome the odds to win the Super Bowl. For the millions of rabid NFL fans, Inside the Helmet is an all-access pass into the huddle, the locker room, and the minds of the warriors on the field.