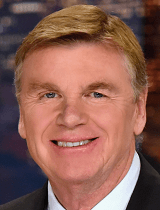 Mike Lynch was the principal sports anchor at WCVB Channel 5 in Boston from September 1985 to August 2019. He reported weekdays on NewsCenter 5 at 4PM, 5PM, 6PM, 7PM, 10PM and 11 PM. Fondly referred to as “Lynchie” by his fans and colleagues, Mike, announced his plan to retire from anchoring SportsCenter 5 in August 2019, but he isn’t leaving the Channel 5 family and has transitioned to part-time as a special, sports correspondent.

He joined Channel 5 in March 1982 as weekend sports anchor. From 1995 through 2008, Mike hosted the weekly sports program “Patriots All Access,” a behind-the-scenes look at New England’s NFL franchise, and served as a broadcast commentator during Patriots pre-season games. He has also done play-by-play coverage for the Boston Celtics, New England Patriots, and college football. For eleven years, he hosted the Boston College weekly football coach’s show “Eagles Preview” on Channel 5.

In 1985, Mike initiated “High Five,” a weekly NewsCenter 5 report highlighting the achievements of high school student athletes. For over 30 years, these unique segments have been lauded by critics and received numerous honors for a continuing commitment to covering high school athletics.

Mike is also instrumental in the annual production of “High 5 Salutes Thanksgiving Heroes,” WCVB’s half-hour wrap-up program of all the traditional high school football rivalries across the Bay State.

Mike was voted Massachusetts “Sportscaster of the Year” by the National Sportswriters and Sportscasters Association in 1985-1991, 1999, 2003, and 2006-2012 for a total of 16 times, the most honors of anyone in the history of the award. In 1987, SportsCenter 5 won the United Press International Award for “Best Sports Reporting” in the country.

Prior to coming to WCVB, he was sports director for Boston’s WMRE Radio, formerly WITS, from 1977 to 1983. During this time, Mike was responsible for the station’s Boston Red Sox and Boston Bruins pre-game shows. In addition, he hosted a weeknight sports talk show and was the radio voice of Harvard University’s football broadcasts. Mike’s broadcasting career began in 1974 at WLYN Radio in Lynn, where he served as a color commentator for high school football and basketball broadcasts.

Mike was brought up in the Boston suburb of Swampscott. He graduated from Harvard in 1977. While in college, he quarterbacked and kicked for the Harvard team that won the 1975 Ivy League Football Championship. He also played first base for the Crimson baseball team.

Mike resides in Winchester, MA, with his wife Mary Ellen, and has three daughters Kelly, Molly and Katey.