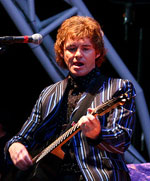 A key presence in the synth pop movement of the early ’80s, Naked Eyes formed in Britain in 1981. Comprised of former schoolmates Pete Byrne (vocals) and Rob Fisher (keyboards), the duo debuted in March 1983 with the LP Burning Bridges, reissued in the U.S. a month later (minus several tracks) as a self-titled effort. The lead single, a majestic cover of the Burt Bacharach-Hal David perennial “Always Something There to Remind Me,” emerged as a hit on both sides of the Atlantic, reaching the U.S. Top Ten on the strength of its video, which received heavy airplay on the fledgling MTV network. The American follow-up, “Promises, Promises” (not the Bacharach/David composition), was also a major hit, and Naked Eyes‘ future looked bright; however, 1984’s Fuel for the Fire fared poorly, its lone single “(What) In the Name of Love” barely scraping into the Top 40. The duo disbanded soon after, and in 1988 Fisher resurfaced as one half of the pop duo Climie Fisher. He died August 25, 1999, of complications following stomach surgery.

Byrne released a solo album, The Real Illusion in 2001, which featured some of the last tracks he wrote with Fisher for a proposed third Naked Eyes album. More recently, the Naked Eyes version of “Always Something There To Remind Me” was used in the trailers of the Vince Vaughn/Jennifer Aniston hit comedy “The Breakup”. On July 31, 2007, Naked Eyes, featuring Byrne, released Fumbling With The Covers, an all-new CD which consists of covers of Bob Dylan, The Beatles, Elvis Costello, along with Naked Eyes hits.