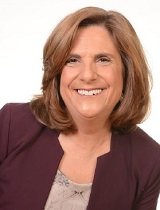 On March 13, 2012, Nancy’s 27 year old son Peter was diagnosed with ALS. Her family’s world changed in a moment. They were told that there is no treatment or cure and the prognosis was 2-5 years. Since that day, Nancy has immersed herself in the ALS community as an advocate and thought leader. In the past 4 years Nancy has traveled and networked to the offices of CEO’s, Senators, Congressmen, top doctors and governmental authorities. She has testified in Washington DC on Capitol Hill, at the White House and to an FDA panel regarding important issues affecting the ALS community. Nancy has developed strong relationships with executives at both the local and national levels of ALS organizations involved in research, patient support, advocacy and fundraising.

August 2014, Nancy’s son Peter along with their family and supporters inspired the ALS Ice Bucket Challenge to go viral, raising $220 million for the ALS Association and its global partners. During that August and the months following, Nancy has done many domestic and international television, magazine and web interviews. She has also been speaking at many events both domestically and internationally inspiring others with their story and continuing the momentum created for their cause, ALS.

Nancy holds a business degree from Boston College and an honorary Doctorate in Humane Studies from Endicott College. During her 14 year career at Keller Williams, Nancy was a top agent in her Market Center serving on the ALC and also working on many committees throughout her agent career. She also held positions in the Beverly Market Center as the Productivity Coach, Team Leader and lead trainer.

She presently serves on the Board of Trustees at Endicott College and also is a National Trustee for the ALS Association. Her Ted Talk , on Ted.com, has been viewed over 1 million times and her corporate, inspirational speaking has taken her all over the world including Mumbai, Austria, Sweden and Australia.

“Nancy Frates is truly an extraordinary person… Not only was Nancy’s presentation well-informed and insightful, it was incredibly inspiring.”

“Nancy graced the stage at our annual gala for 2,000 people, and you could hear a pin drop as she revealed chapter by chapter of her amazing story of awareness, discovery, family, and the confrontation of inevitable loss.”

“Nancy presented her story to an international audience of over 700 attendees from 20 different countries. Our audience was inspired, motivated and deeply touched by her talk.”

“Nancy is a dynamic presenter and was the only speaker (of eight) at our event to receive a full-house standing ovation.”

“Her message of compassion, dedication, and determination in the face of adversity more than resonated with our 800+ attendees – it empowered!  Not only was Nancy a dream to work with leading up to the event, but on-site she was both generous with her time and gracious with our attendees and staff.”

The Ice Bucket Challenge: Pete Frates and the Fight against ALS

While everyone knows of the Ice Bucket Challenge, the viral craze that swept the nation in summer 2014, too few know the truly inspirational story behind it. Pete Frates was a man at war with his own body. A man whose love for others was unshakable. A man who refused to fight alone, and in so doing mobilized a global army to combat one of the most devastating diseases on earth: ALS, or Lou Gehrig’s disease. When disease crippled Frates, the former Boston College baseball star turned tragedy into inspiration. Pete’s story is a testament to the power of love, the steadfastness of family, the generosity of strangers, and the compassion of crowds. Half of the authors’ proceeds will go to the Frates family.