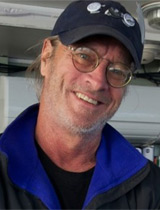 Peter Jay Brown is a director and cinematographer, who specializes in real life stories, cultural adventures, LIVE events, and big sexy animals that can eat you! His 30 years of experience producing shows such as Real People, Entertainment Tonight, and numerous cable programs have given him a unique insight into the storytelling arts.

Best known recently on TV for his stint on Animal Planet’s hit show, Whale Wars, Brown has been active in the Sea Shepherd Conservation Society for over 25 years, and has recently released a feature length documentary based on his experiences, entitled “Confessions of an Eco-Terrorist”. Over the past years, Brown has produced and directed twenty films with the Kenya Wildlife Services for International television to champion wildlife conservation in Africa. In December 2001 Brown helped Mary MacMakin (winner of the EIS award in Chicago for her 40 years humanitarian work in Afghanistan) re-establish her charity PARSA in Kabul Afghanistan.

Aside from his charity and conservation work, Brown created, wrote, directed and produced the self-esteem based television series “Pops”, which was also incorporated into the elementary level curriculum in five states. He was the original Field Producer/Director in 1981-82 for one of television’s most successful shows: “Entertainment Tonight”, and was the official film biographer of Dr. Norman Vincent Peale for the last years of his life. Early in his career, Brown created the conceptual foundation for NBC’s “Real People” #1 rated television series; producing and directing over 100 up lifting, positive stories between 1979-81.

Brown has produced/directed LIVE concerts for Diana Ross, Jars of Clay, and worked on variety TV shows and the US Music festival. He has filmed religious and cultural events around the world. In October 2012 he produced a LIVE stream signal from Taiji, Japan via cell phone with his association with DSILIVE. December until the present ezearth.tv has been broadcasting LIVE from Antarctica… the ends of the earth.

Today Peter relates his life experiences to young people around the world by speaking at film festivals, “ocean” celebrations, and universities world-wide infusing his audiences with the passion and enthusiasm that has made him one of the world’s leading environmental activists. No gloom and doom from Peter, but positive solutions that everyone can embrace in their everyday lives…