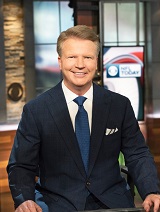 Simms has been a mainstay on Showtime’s Inside The NFL since 2008 and during the NFL season has a weekly spot as co-host of SiriusXM’s Mad Dog Radio program Simms and the Mad Dog.
Simms spent 15 years as a quarterback for the New York Giants, winning two Super Bowl titles (1987, 1991). He was named Super Bowl MVP in Super Bowl XXI (1987) when he completed 22 of 25 passes in defeating the Denver Broncos for Big Blue’s first Super Bowl win. In addition, Simms is second in Big Blue history for most passes completed and attempted for one game, one season and throughout his career; most touchdown passes throughout his career; and most 300 yard games throughout his career. Simms completed his career with a .598 win percentage (95-64), the highest for any Giants quarterback with over 50 games played.

The Kentucky-native was the Giants first selection in the 1979 NFL Draft out of Morehead State University. Simms would go on to be selected to participate in NFL Pro Bowl games in 1993 and before that in 1985, when he was named MVP of the contest.

Prior to joining CBS Sports, Simms served as a game analyst on NBC’s top NFL broadcast team along with Dick Enberg and Paul Maguire from 1995-1998 (which included two Super Bowls). Away from the gridiron, he has also announced weightlifting events for NBC Sports coverage of the 1996 Olympic Summer Games and served as sideline reporter on “The NBA in NBC”. Simms also worked on the “NFL Quarterback Challenge” and “Run To Daylight” while at NBC.

In addition to his work in the broadcast booth, the Franklin Lakes, NJ resident authored the New York Times bestselling “Sunday Morning Quarterback: Going Deep on the Strategies, Myths and Mayhem of Football”. Utilizing his rich football IQ, Simms has become a quarterback skills expert to which he teaches and provides evaluations of high school, college and professional quarterbacks to top NFL personnel directors.

Simms is a co-owner and contributor to The Experts Network (TXN), an interactive digital sports network consisting of sports analysis along with Cris Collinsworth, Boomer Esiason, Howie Long, Nick Faldo and Cal Ripken, Jr. Launched in April 2011, the TXN specializes in the development of digital and original programming, repurposed content and high-end special events. The interactive platform formulates strategic distribution partnerships with online sports networks and serves as the online “destination” sports property.

Simms and wife Diana reside in Franklin Lakes, NJ and have three children, Chris, Matt and Deirdre, as well as five grandchildren. Chris Simms played quarterback for the Tampa Bay Buccaneers, Tennessee Titans and Denver Broncos and now serves as one of the leading football analysts in the industry. Matt Simms played quarterback for the New York Jets, Buffalo Bills and Atlanta Falcons.

Sunday Morning Quarterback: Going Deep on the Strategies, Myths, and Mayhem of Football

An in-depth and surprising look at the game, Sunday Morning Quarterback will dramatically change the way you watch football. You've heard all the football clichés: "Their offense is too predictable," or "They've got to win the turnover battle," or "They didn't make any halftime adjustments." Perhaps you've heard them so often that you've come to see them as obvious truths. Phil Simms, after an illustrious career as a Super Bowl-winning quarterback and a broadcaster, is here to tell you that these -- and many other blanket statements taken as gospel -- are all myths, and whoever says them has no idea of what they're talking about. Drilling deep into the core of football, Simms also shows the hidden signs that players look for that can determine the outcome of a game. Whether it's discovering how a linebacker positions his feet before he blitzes or how to react if the safety is eight or nine yards from the line of scrimmage, knowing these "dirty little secrets" gives players and their coaches a tremendous advantage. In addition, Simms shares his insights into the enormous challenges coaches face in today's game, evaluating the top coaches and what makes them successful. He takes a look at some of the greatest players he's played with and against, and what he misses most about the game -- waking up Monday mornings feeling beat up and sore. He looks at the next generation of football players -- his son, Tampa Bay's Chris Simms, among them. Through it all, Simms shares stories from his playing days with Bill Parcells and the New York Giants, and the inside access he's had as an announcer for one of the top NFL broadcasting teams in football. Fun and lively, Sunday Morning Quarterback should be required reading for anyone who loves football.