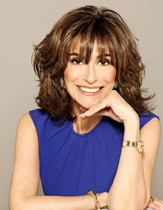 Television anchor, legal analyst, trial attorney, actor and best-selling author, Rikki Klieman has earned a sterling reputation as one of the nation’s most celebrated lawyers and legal authorities. A dynamic and versatile communicator, Klieman found success in multiple fields, including television journalism, the courtroom, academia and public speaking. Ms. Klieman lectures to various business and bar associations as well as charitable and school groups.

Rikki is now a Contributor/Legal Analyst for CBS This Morning. She was an Anchor at the Courtroom Television Network from 1994-2010 and a Contributor for the CBS Early Show, the NBC Today Show as well as the E! Network. She has also appeared as a legal analyst on NBC’s Nightly News, CBS Evening News, ABC, CNN, CNBC and MSNBC. In addition, Rikki continues to inspire the lives of others with her autobiography, “Fairy Tales Can Come True – How a Driven Woman Changed Her Destiny,” which reached the L.A. Times Best Seller List.

She remains Of Counsel to the Boston, Massachusetts law firm of Klieman & Lyons, where she specialized in criminal trial and appellate practice as well as civil litigation. She received her J.D. from Boston University School of Law. Prior to her legal career, she was a theater major at Northwestern University who became a professional actress. Following law school, she served as a law clerk for the Honorable Walter Jay Skinner of the United States District Court of Massachusetts, and as a prosecutor with both the Middlesex and Norfolk County District Attorney’s offices.

She was named one of the five most outstanding women trial lawyers in the country by TIME magazine. She is often the subject of magazine and newspaper articles and was profiled by CNN. She has been interviewed on countless radio and television programs about various aspects of criminal and civil law and procedure, including, among others, “60 minutes,” “20/20”, “The McLaughlin Group” and a “Nightline Special Report” on rape hosted by the late Peter Jennings.

Ms. Klieman was a member of the Adjunct Faculty at Columbia Law School, and was an Adjunct Professor at Boston University School of Law teaching trial practice. She lectures across the country on the legal system and taught trial advocacy at the Intensive Trial Advocacy Program at Harvard, the University of Virginia Trial Advocacy Institute, Northwestern University’s Short Course for Criminal Defense Lawyers, the National Criminal Defense College, the Western Trial Advocacy Institute and Gerry Spence’s Trial Lawyers College.

She has published numerous articles on criminal law and contributed to a book, “Women Trial Lawyers.” She was featured in a chapter of “Good Will Toward Men” by Jack Kammer and in the national best seller, “A Civil Action” by Jonathan Harr. She writes the bi-annual supplement for “Representing Witnesses Before Federal Grand Juries.” She was the co-editor of a book on cross examination called “Take the Witness.” In addition, she was a columnist about legal issues for the popular LA Confidential Magazine. She currently writes for The Daily Beast.

Ms. Klieman served on the Advisory Committee to the U.S. Supreme Court on the Federal Rules of Criminal Procedure, the Board of Directors of the National Association of Criminal Defense Lawyers and the Board of Visitors for Boston University School of Law. She was a member of the American Bar Association’s National Conference of Lawyers and Representatives of the Media. She currently serves on the Council of 100, a mentoring organization of outstanding alumnae for the benefit of collegiate women and young graduates at Northwestern University.

Rikki is the wife of William Bratton, current NYPD Police Commissioner, which creates new opportunities to give back to the community. She is now serving on the Board of Directors of the Police Athletic League (PAL), dedicated to creating a safe place for kids…a passion throughout her life.

From early days of raising funds for City of Hope to later years for City Meals on Wheels, she believes in helping those most often in need – children, families and the elderly. Her great joys have been working as a mentor at Northwestern University and at Court TV and serving as a member of the Board of Directors of Shepherd House, a Boston women’s halfway house for those who suffered from substance abuse problems and were on the road to recovery. She also served on the Executive Board of the ADL (Anti Defamation League) in both New England and New York.

When she and her husband lived in Los Angeles during his tenure as Chief of Police, she pursued her interests of mentoring young people and joining the fight against sexual assault and domestic violence – work in which she has been active for decades. She was a member of the Board of Directors of the Rape Treatment Center of UCLA-Santa Monica and the Board of Directors of LA’s Best, an after school enrichment program for disadvantaged elementary school children. For these community endeavors, she was the recipient of various public service awards.

Rikki and her husband now live in New York City where she also serves on the Board of Directors and the Membership Committee of the Women’s Forum.

Fairy Tales Can Come True: How a Driven Woman Changed Her Destiny

At thirty-five, Rikki Klieman was named one of America's top five female trial attorneys by Time magazine for her work in criminal defense, one of the toughest branches of law for a woman to enter. The Frenetic lifestyle of a successful defense attorney, however, began to damage Rikki's health and happiness. She suffered from exhaustion, chronic back pain, and two failed marriages, but considered these afflictions to be part of "the price of the prize." After several decades as one of the most sought-after attorneys, she joined Court TV, where she gained national prominence covering the O.J. Simpson trial and went on to host Court TV's daily show, Both Sides. Now, at midlife, Rikki shares how she has finally achieved, in her loving marriage to L.A. Police Chief Bill Bratton, the balance many seek but few find. Her dramatic story proves that fairy tales can come true and that great love and great success can go hand in hand.

Take the Witness: The Experts Speak on Cross Examination

This volume is designed for educating lawyers who are starting their trial practice and by suggesting to seasoned ones more effective approaches. But all of who are acquainted with the drama of the courtroom, from theater, films and Court TV, and reading the words of the experts and the stories of their triumphs (and sometimes disappointments.) Take the Witness makes for entertaining and stimulating reading for laymen and lawyers alike.