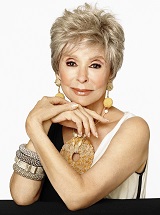 If there ever was one singular show business sensation, it is legendary Oscar-winning actress-singer-dancer Rita Moreno. She continues to wow audiences after more than six decades.

An internationally-acclaimed and honored performer and lecturer, Ms. Moreno provides a fascinating look into the world of entertainment.

With her quick wit and earthy candor, she’ll share experiences, anecdotes and encounters with some of show businesses’ biggest names. She has it all — being one of only 12 living performers who have the distinct honor of winning all of the industry’s most prestigious awards: The Oscar®, The Emmy®, The Tony® and The Grammy®.

Ms. Moreno was honored by The Kennedy Center for a lifetime of artistic achievement. Her status as a national treasure was previously recognized when President George W. Bush presented her with the Presidential Medal of Freedom. President Obama awarded her the American National Medal of the Arts for her lifetime of service and contributions to the arts.

Rita is currently starring in and executive produced the Steven Spielberg directed remake of “West Side Story.” Her documentary, “Just a Girl Who Decided To Go For it,” is streaming on Netflix.

She is most proud of being a trailblazer for Latinos in the entertainment industry.

In this luminous memoir, Rita Moreno shares her remarkable journey from a young girl with simple beginnings in Puerto Rico to Hollywood legend-and one of the few performers, and the only Hispanic, to win an Oscar, Grammy, Tony and two Emmys. Born Rosita Dolores Alverio in the idyll of Puerto Rico, Moreno, at age five, embarked on a harrowing sea voyage with her mother and wound up in the harsh barrios of the Bronx, where she discovered dancing, singing, and acting as ways to escape a tumultuous childhood. Making her Broadway debut by age thirteen-and moving on to Hollywood in its Golden Age just a few years later-she worked alongside such stars as Gary Cooper, Yul Brynner, and Ann Miller. When discovered by Louis B. Mayer of MGM, the wizard himself declared: 'She looks like a Spanish Elizabeth Taylor.' Cast by Gene Kelly as Zelda Zanders in Singin' in the Rain and then on to her Oscar-winning performance in West Side Story, she catapulted to fame-yet found herself repeatedly typecast as the 'utility ethnic,' a role she found almost impossible to elude. Here, for the first time, Rita reflects on her struggles to break through Hollywood's racial and sexual barriers. She explores the wounded little girl behind the glamorous façade-and what it took to find her place in the world. She talks candidly about her relationship with Elvis Presley, her encounters with Howard Hughes, and the passionate romance with Marlon Brando that drove her to attempt suicide. And she shares the illusiveness of a 'perfect' marriage and the incomparable joys of motherhood. Infused with Rita Moreno's quick wit and deep insight, this memoir is the dazzling portrait of a stage and screen star who longed to become who she really is-and triumphed.