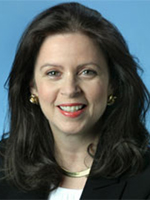 Robin Wright has reported from more than a 140 countries on six continents for The Washington Post, The Los Angeles Times, The Sunday Times of London, CBS News and The Christian Science Monitor. Wright has also written for The New Yorker, The Atlantic Monthly, Foreign Affairs, Foreign Policy, The New York Times, The International Herald Tribune and others.

Robin Wright‘s foreign tours include the Middle East, Europe, Africa, and several years as a roving foreign correspondent. She has covered a dozen wars and several revolutions. She most recently covered U.S. foreign policy for The Washington Post.

Among several awards, Wright received the U.N. Correspondents Gold Medal, the National Magazine Award for reportage from Iran in The New Yorker, and the Overseas Press Club Award for “best reporting in any medium requiring exceptional courage and initiative” for coverage of African wars. Robin Wright was named journalist of the year by the American Academy of Diplomacy, and won the National Press Club Award and the Weintal Prize for diplomatic reporting. Wright has also been the recipient of a John D. and Catherine T. MacArthur Foundation grant.

As an author, Wright has been a fellow at the Carnegie Endowment for International Peace, the Brookings Institution, Yale University, Duke University, Stanford University, and the University of California at Santa Barbara. She lectures extensively around the United States and has appeared on ABC, NBC, CBS, CNN and PBS programs, including “Meet the Press,” “Face the Nation,” “This Week,” “Nightline,” the “Newshour,” “Frontline,” and “Larry King Live.”

Among her books, The Last Great Revolution: Turmoil and Transformation in Iran was selected as one of the 25 most memorable books of the year 2000. Robin Wright is also the author of Sacred Rage: The Wrath of Militant Islam, Flashpoints: Promise and Peril in a New World, and In the Name of God: The Khomeini Decade.

Dreams and Shadows: The Future of the Middle East

One of the presumed justifications for the 2003 U.S. invasion of Iraq, and the subsequent occupation, was to bring democracy and political stability to the entire Middle East. As Robin Wright, who has covered the Middle East for over 30 years for The Washington Post, makes wonderfully clear in this important, highly illuminating, and provocative book, the goals of regional democracy and stability may be mutually exclusive.

For a generation, Muslim extremists have targeted Americans in an escalation of terror that culminated in the September 11 attacks. Our shared confusion -- Who are the attackers? Why are we targets? -- is cleared away in a book as dramatic as it is authoritative. Updated with new chapters on Afghanistan and the the broader Islamic movement, Sacred Rage combines Robin Wright's extraordinary reportage on the Islamic world with an historian's grasp of context to explain the roots, the motives, and the goals of the Islamic resurgence. Wright talked to terrorists, militant religious leaders, and fighters from Beirut to Islamabad and Kabul. Their voices of rage reverberate here -- right up to the attacks in New York and Washington. Across continents extends a challenge we fail to understand at our peril. Sacred Rage now casts light on the war being fought in the shadows.

The Last Great Revolution: Turmoil and Transformation in Iran

Since the 1979 revolution ended 2,500 years of monarchy, Iran's Islamic revolution has witnessed unprecedented political and social changes that are transforming one of the world's oldest civilizations -- with an impact far beyond its borders. Robin Wright, renowned journalist and Mideast expert, takes us inside Iranian society to illustrate the new women's rights movement, the birth of an internationally acclaimed film industry, the evolution of ideas on marriage and sex, the rise of a new generation of young people, and the radical reforms within the religion itself that blend Islamic tenets with democratic ideals. Comprehensive and meticulously observed, Wright's account of the last two decades of Iranian history provides insight into the lives of the people, influential figures, and political leaders in present-day Iran and raises fascinating questions about the evolving legacy of "the last great revolution."

Rock the Casbah: Rage and Revolution Across the Islamic World

Simon & Schuster will publish Robin Wright's book, "ROCK THE CASBAH: Rage and Revolution across the Islamic World" on July 12, 2011. Wright, the acclaimed foreign correspondent and television commentator, was well into her work on the many political, social, cultural, young, grassroot, and female forces changing the Islamic world when protests erupted across the Middle East. Many characters in Wright's book have been involved in the upheavals. The publication date has been accelerated to July because of the extraordinary history now unfolding. Wright has reported on Islamic militancy for four decades. In this book, she tells the stunning personal stories behind the rejection of both autocrats and extremists in the Muslim world. Wright profiles young techies mobilizing political uprisings, clerics publicly repudiating Osama bin Laden, Muslim comedians ridiculing militancy, hip hop artists rapping against guns and bombs, playwrights and poets redefining jihad, feminists reinterpreting the Koran, and militants denouncing violence. She describes the new phase of the Islamic activism as a counter-jihad. For some, it's about reforming the faith. For others, it's overhauling political systems. For all, it is about basic rights-on their own terms and not necessarily based on Western models. Muslims are now confronting extremism and rescuing their faith from a virulent minority, thereby taking charge of history and doing what the West cannot. Robin Wright has reported from more than a 140 countries on six continents for The Washington Post, The Los Angeles Times, The New Yorker, The New York Times Magazine, Time, The Sunday Times of London, The Atlantic, Foreign Affairs, the International Herald Tribune and others. Her foreign tours include the Middle East, Europe, Africa, and Asia. She has appeared on Meet the Press, This Week, Face the Nation, Charlie Rose, Stephen Colbert and morning and evening newscasts on NBC, ABC, CBS, PBS, CNN and MSNBC. Wright has been a fellow at the U.S. Institute of Peace, Brookings Institution, Woodrow Wilson International Center for Scholars, Carnegie Endowment for International Peace Yale, Duke, Stanford and others. Among many awards, she won the U.N. Correspondents Association Gold Medal for coverage of foreign affairs, the National Magazine Award, and the Overseas Press Club Award for "best reporting in any medium requiring exceptional courage and initiative." The American Academy of Diplomacy selected her as the journalist of the year in 2004. She has authored five books.