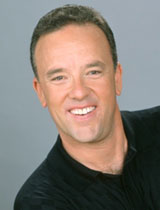 Best-selling author and inspirational speaker, Roger Crawford has helped more than 3,000 organizations break through self-imposed limitations and reach levels of achievement previously thought to be impossible. Roger Crawford‘s work has been seen on Larry King Live, Good Morning America, Inside Edition, and CNBC and has been profiled in well-known publications such as USA Today, Men’s Fitness, and Fast Company. NBC was awarded an Emmy for a television movie that featured Roger‘s extraordinary accomplishments. Roger Crawford is an internationally acclaimed author and his books have been translated into 11 languages. His most recent book, THINK AGAIN! ~Discover Possibilities Hidden in Plain Sight, was released June 2007.

Before Roger Crawford was on center stage he excelled on center court. Sports Illustrated calls Roger “one of the most accomplished physically challenged athletes in history.” Roger Crawford‘s compelling story of how he became an NCAA Division I tennis champion demonstrates that choices matter more than circumstances, a powerful message that everyone can apply to their own lives. Roger Crawford was the first physically challenged athlete to receive full certification by the United States Professional Tennis Association as a tennis professional. Now, as a world-renowned speaker, Roger Crawford applies the same exuberance, skill, and dedication to producing winners in business and life.

As a champion on and off the tennis court, Roger Crawford is a once in a lifetime experience not to be missed!

How High Can You Bounce?

From one of America's most powerful speakers comes a unique and inspiring new book that gives readers the keys to weathering life's challenges and bouncing back better than ever! Roger Crawford is living testimony to the power of resilience. Physically challenged from birth, told he would never walk, he became a tennis champion certified by the U.S. Professional Tennis Association and a bearer of the Olympic torch. Now his mission is to energize others with the skills and attitudes that enable us to bounce back from life's setbacks. He offers a step-by-step program for building resilience into our daily life. What's more, he shows how resilience is the most important factor for achieving personal and professional success. And he introduces dozens of unforgettable men and women who illustrate the principles of resilience in every walk of life.

Playing from the Heart, Revised: A Portrait in Courage

Roger Crawford tells of his triumph over astounding odds with grace, candor, and humor in this remarkable book. Although born with such severe physical deformatities that doctors believed he would never even be able to walk, Roger had the determination and heart to become a champion—in tennis and in life. He stands as an extraordinary example for us all, encouraging us to reach our full potential.

Roger will show you how to Clarify Your Purpose, Identify Your Pessimism, Amplify Your Potential, Multiply Your Possibilities, and Quantify Your Progress.