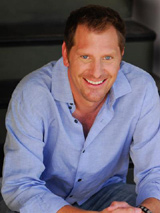 Ron Pearson is a comedian, an actor and a world record juggler that The Hollywood Reporter calls “a comic ball of fire.”

Pearson has taken multitasking to a whole new level, from starring for several years on Malcolm & Eddie, to guest starring on The Drew Carey Show, Two Guys and a Girl, The George Lopez Show, and recurring on That 70s Show.

As a comedian, Ron has made numerous late night appearances, from The Late Late Show to The Dennis Miller Show to Comedy Central. He also found time to do years of hosting television shows on The Family Channel and The Discovery Channel. Ron has developed his brand of humor into a performance that captivates the tops of the Fortune 500 companies and garnered him a nomination for Comedian of the Year.

It’s a good thing he knows how to juggle, as Ron has to keep his family of four afloat in Los Angeles. Pearson has been married to his wife, Tanya, for eight years, which is almost a showbiz record. They have two children: Reagan and Tex.