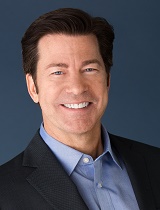 The Power of Laughter. The Language of Business

Studies have proven what we all intuitively know to be true: laughter brings people together and makes them feel great. And no one delivers laughs to corporate audiences as consistently and cleverly as Scott Bloom.

Whether you need a professional emcee, a world-class awards host, or an out-of-the-box guest speaker, Scott provides an insightful, interactive, laughter-packed experience that energizes your audience and transforms your event.

Scott is a veteran comedian and television personality who has built a reputation as the “go-to” choice for business humor, having hosted hundreds of events for companies such as FedEx, Ford, IBM, MetLife, Pfizer and Verizon. Scott makes it his business to immerse himself in the specifics of your business and your event. That’s how he’s able to talk like an insider about your organization’s products and people, buzzwords and acronyms.

In addition to his work as a highly respected emcee and comedic keynote speaker, he has had a successful career in television. Scott has been featured on Comedy Central numerous times, and was the host of his own weekly VH1 series. He currently lives in Los Angeles.

You Can Judge a Book by Its Cover

They say you can't judge a book by its cover but that is no longer true. In this hilarious book of faux book covers, Scott upends the traditional content of the personal and professional development genres by presenting an unexpected viewpoint on the same. You'll learn that you CAN judge a book by its cover, without judgement. You'll also learn from covers like The Power of Later, Perfecting Perfectionism, and How to Increase Your Profits by Making More Money. Imagine that! Thumb through the pages and prepare to see more of the conventional go sideways. Bloom has created a ridiculously funny collection of authentic-looking covers and content that aren't real. Or are they? That depends on your point of view. At the least, they are thought provoking. You'll wonder whether you've been living your best life. And at the most, you'll chuckle at the absurdity of it all. You CAN Judge a Book by Its Cover is a delightful parody of truths that allows us to laugh at ourselves simply by reading the covers. Their beauty is truly skin-deep and their wisdom is entirely on the surface. All the answers to life's challenges are revealed in this one book of book covers. Hmmm.