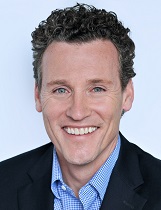 Scott Christopher is author of the best-selling People People: Who They Are, Why They Win and How To Become One, The Levity Effect: Why It Pays to Lighten Up, and The Seven UPs of Happiness.

Since 1995, Scott has circled the globe entertaining and motivating thousands of audiences from senior leader retreats to all-staff meetings.

Applicable to all audiences in any industry, Scott’s unforgettable messages and off-the-cuff humor illustrate firsthand how levity, humor and becoming a ‘people person’ enrich lives at work and at home.

Scott has a Master’s in HR Management from the University of Connecticut and while an undergraduate at Brigham Young University, Scott was honored with the United States’ most prestigious acting scholarship, the Irene Ryan Award, at the Kennedy Center in Washington, D.C.

The Seven UPs of Happiness

Easy-to-digest tips on how to be happy in your life―both at home and at work.

In this wise and witty new book, culture consultant and humorist Scott Christopher shares seven UPs that anyone can master to happily manage at work and home. In chapters including dealing with change (Suck It UP), strengthening teams (Huddle UP), developing gratitude (Give It UP), and integrity and authenticity (The UP and UP), Scott provides easy-to-understand fundamentals and easy-to-implement tips for finding happiness (and staying happy!) in both the workplace and your everyday life.

Ever have trouble connecting with those of “another generation”? Loosen UP!

The Levity Effect: Why it Pays to Lighten Up

Bestselling author Adrian Gostick and humorist Scott Christopher provide powerful examples of leaders from Boeing, Nike, KPMG, Yamaha, Enterprise, Zappos, and dozens of others, all of which prove that lightening up leads to real business results and a more engaged workplace. The Levity Effect presents extensive research into the subject-including compelling data from the Great Place to Work- Institute's 1 million-member database-that cuts against the grain of traditional business thinking to reveal that great companies consistently earn significantly higher marks for fun. The Levity Effect turns traditional business thinking on its head to prove again and again that a fun and engaging workplace leads to more focused employees, satisfied customers, and, better communication.