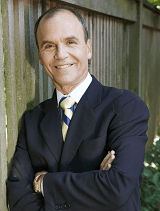 Scott Turow is a writer and attorney. He is the author of eleven best-selling works of fiction, including his first novel, Presumed Innocent (1987). His newest novel Testimony (2017) arrives in May from Hachette/Grand Central Publishers. He has also written two non-fiction books about his experiences in the law, and his novels have been the basis of several films, including the movie, “Presumed Innocent.” His books have sold more than 30 million copies around the world.

A former federal prosecutor, Mr. Turow has been a partner in the Chicago office of Dentons LLC, an international law firm, since 1986, concentrating on white collar criminal defense, while also devoting a substantial part of his time to pro bono matters. He has served on a number of public bodies, including the Illinois Commission on Capital Punishment to recommend reforms to Illinois’ death penalty system, and was the first Chair of Illinois’ Executive Ethics Commission which was created in 2004 to regulate executive branch employees in the Illinois State government. He was also President of the Authors Guild, the nation’s largest membership organization of professional writers, and is an Emeritus Trustee of Amherst College.

Life would seem to have gone well for George Mason. His days as a criminal defense lawyer are long behind him. At fifty-nine, he has sat as a judge on the Court of Appeals in Kindle County for nearly a decade. Yet, when a disturbing rape case is brought before him, the judge begins to question the very nature of the law and his role within it. What is troubling George Mason so deeply? Is it his wife's recent diagnosis? Or the strange and threatening e-mails he has started to receive? And what is it about this horrific case of sexual assault, now on trial in his courtroom, that has led him to question his fitness to judge? In Limitations, Scott Turow, the master of the legal thriller, returns to Kindle County with a page-turning entertainment that asks the biggest questions of all. Ingeniously, and with great economy of style, Turow probes the limitations not only of the law but of human understanding itself.

Stewart Dubinsky knew his father had served in World War II. And he'd been told how David Dubin (as his father had Americanized the name that Stewart later reclaimed) had rescued Stewart's mother from the horror of the Balingen concentration camp. But when he discovers, after his father's death, a packet of wartime letters to a former fiance, and learns of his father's court-martial and imprisonment, he is plunged into the mystery of his family's secret history and driven to uncover the truth about this enigmatic, distant man who'd always refused to talk about his war. As he pieces together his father's past through military archives, letters, and, finally, notes from a memoir his father wrote while in prison, secretly preserved by the officer who defended him, Stewart starts to assemble a dramatic and baffling chain of events. He learns how Dubin, a JAG lawyer attached to Patton's Third Army and desperate for combat experience, got more than he bargained for when he was ordered to arrest Robert Martin, a wayward OSS officer who, despite his spectacular bravery with the French Resistance, appeared to be acting on orders other than his commanders'. In pursuit of Martin, Dubin and his sergeant are parachuted into Bastogne just as the Battle of the Bulge reaches its apex. Pressed into the leadership of a desperately depleted rifle company, the men are forced to abandon their quest for Martin and his fiery, maddeningly elusive comrade, Gita, as they fight for their lives through carnage and chaos, the likes of which Dubin could never have imagined. In reconstructing the terrible events and agonizing choices his father faced on the battlefield, in the courtroom, and in love, Stewart gains a closer understanding of his past, of his father's character, and of the brutal nature of war itself.

Ultimate Punishment : A Lawyer's Reflections on Dealing with the Death Penalty

As a respected criminal lawyer, Scott Turow has been involved with the death penalty for more than a decade, including successfully representing two different men convicted in death-penalty prosecutions. In this vivid account of how his views on the death penalty have evolved, Turow describes his own experiences with capital punishment from his days as an impassioned young prosecutor to his recent service on the Illinois commission which investigated the administration of the death penalty and influenced Governor George Ryan's unprecedented commutation of the sentences of 164 death row inmates on his last day in office. Telling the powerful stories behind the statistics, as he moves from the Governor's Mansion to Illinois's state-of-the art 'super-max' prison and the execution chamber, Ultimate Punishment has all the drama and intellectual substance of Turow's bestselling fiction.