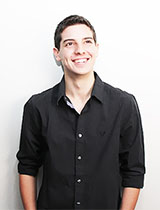 As Founder & CEO (Chief Executive Optimist) of Count Me In, Shane Feldman is the creative strategist behind the world’s largest youth-run movement. Born out of Shane’s exceedingly challenging transition into high school, Count Me In is a student-led charity and global brand that helps young people find their passion through community involvement. Count Me In’s core mission is to transform the way teens see themselves in connection to the world through volunteerism.

In April 2014, Shane produced Count Me In’s first global broadcast. Featuring an impressive line-up of celebrity speakers and entertainers, including Cody Simpson, Nikki Yanofsky, Luke Bilyk, Ashley Leggat and other teen icons. The show was designed to motivate young people everywhere to get involved and volunteer in their own communities for a cause of their choice. In 2014, the first annual Count Me In broadcast had an international reach of over 2.2 million, with viewers tuning in from 69 countries across the globe.

As a speaker, Shane Feldman gives audiences the blueprints they need to not only find personal happiness but to share their gifts with the world. Shane’s infectious optimism and instructional know-how ignites a desire to stay driven and build meaningful relationships with your peers, colleagues and communities.

At the age of 13, Shane experienced a difficult transition into high school. But before long, Shane’s dark freshman year began to take the shape of an uplifting national movement. After weeks of lunches eaten alone and no luck at making new friends, Shane approached his guidance councilor, Mr. Conte, for help. Reaching out saved him from depression, and helped Shane discover his key to happiness: getting involved. Through his involvement in clubs and councils, he suddenly had new friends, was enjoying school, and was actually waking up in the morning excited to start each day. Motivated to share this amazing feeling, he decided to organize an assembly to inspire his classmates to become engaged in the school community. Shane’s passion was contagious and before long students at other schools were anxious to join in. That small school assembly is now the largest youth-run event of its kind, and has been broadcast to audiences across the globe. Through “Count Me In”, Shane has inspired young people around the world to make positive choices, and his organization helps connect them with local causes and opportunities matching their interests. Featuring a dynamic line-up of inspirational young leaders, celebrity speakers and empowering performers, Count Me In brings students together with organizations looking for volunteers.

Shane has been recognized by The United Nations Youth Assembly and the Canadian House of Commons for his work on Count Me In. He was honored at the 6th Annual Character Community Awards Celebration with the Citizen of Character Award, and in 2013, Shane was named one of Canada’s Top 20 Under 20 by the Order Of Canada committee.

With previous clients ranging from New York’s CRAZE Marketing Conference to the International Student Leadership Conference, Shane’s dynamic keynotes can be customized for any audience.

When he’s not working on Count Me In, Shane is speaking at schools, conferences and events, and working with non-profits and corporations on improving their youth engagement strategies.