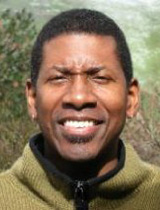 Shelton Johnson dreamed of mountains as a boy, living in inner city Detroit. Shelton Johnson had never been to a mountain range in the United States and his only experiences with nature and wildlife came through television and movie screens.

Enrolled in an MFA program at the University of Michigan, Shelton Johnson applied to be a seasonal worker at Yellowstone, thinking the park would provide a quiet place to work on his writing. “I got off a bus in Gardiner, Montana,” Shelton remembers, “right outside the north entrance….And as I was stepping down onto the ground, there was a bison – a 2,000-pound animal – walking by. There was no one else around and the bison was just strolling by! I looked up at the driver and I said, ‘Does this happen all the time?’ And he looked at me and said, ‘All the time.’ And I said to myself, ‘I have arrived.'”

Shelton Johnson has been working in national parks ever since, spending time in Yellowstone, Great Basin, and as an interpreter at Fort Dupont Park in the Anacostia section of Washington, DC. There, Shelton met students like himself and his friends who had grown up in Detroit – tough inner-city black kids whose understanding of nature was about as distant as Mars. “That’s when I first made the resolution that I had to figure out how to connect these kids with nature, to get them to have a nature experience.”

Shelton found his key for connecting with audiences after being transferred to Yosemite. Deep in the archives of the park, he stumbled across a faded photo of buffalo soldiers who had patrolled Yosemite at the turn of the 20th century. Since 1998, Shelton Johnson has told the story of the Buffalo Soldiers in the national parks – in print, on camera, and in person. He has traveled to public schools and spoken with kids throughout America. He has tracked down descendents of the soldiers, authored an award-winning website, and been lauded by civic groups and governments for his work. During evening programs and daytime ranger walks in Yosemite, he tells the story through the dramatic portrayal of a character he’s developed: Sergeant Elizy Boman.

Shelton Johnson was cited for his extensive collaboration with Ken Burns during the filming of the landmark documentary “The National Parks: America’s Best Idea.” Shelton appeared in the film extensively, reflecting on his experiences as a National Park Service ranger. He also worked on a collaborative project, telling the previously untold stories of diverse peoples in national parks. These messages are reaching far beyond Yosemite National Park and have facilitated lasting connections between African Americans and their national parks.

Born on Emancipation Day, 1863, to a sharecropping family of black and Indian blood, Elijah Yancy never lived as a slave — but his self-image as a free person is at war with his surroundings: Spartanburg, South Carolina, in the Reconstructed South. Exiled for his own survival as a teenager, Elijah walks west to the Nebraska plains — and, like other rootless young African-American men of that era, joins up with the U.S. cavalry. The trajectory of Elijah’s army career parallels the nation’s imperial adventures in the late 19th century: subduing Native Americans in the West, quelling rebellion in the Philippines. Haunted by the terrors endured by black Americans and by his part in persecuting other people of color, Elijah is sustained only by visions, memories, prayers, and his questing spirit — which ultimately finds a home when his troop is posted to the newly created Yosemite National Park in 1903. Here, living with little beyond mountain light, running water, campfires, and stars, he becomes a man who owns himself completely, while knowing he’s left pieces of himself scattered along his life’s path like pebbles on a creek bed.