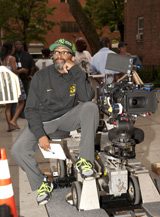 Spike Lee is a notable Writer, Director, Producer, Actor, and Author who revolutionized both the landscape of independent cinema and the role of black talent in film. Widely regarded as a premiere African-American filmmaker, Lee is a forerunner in the ‘do it yourself’ school of filmmaking.

Born in Atlanta, Georgia, and raised in Brooklyn, Lee returned south to attend Morehouse College. After graduation, he returned to Brooklyn to continue his education at New York University’s Tisch School of Arts in Manhattan, where he received his Master of Fine Arts Degree in film production. He founded 40 Acres and a Mule Filmworks, based in the Fort Greene section of Brooklyn, where he has resided since childhood.

Lee is also involved in documentaries and sports programs. He completed the Emmy and Oscar nominated documentary “4 Little Girls” for HBO and received an Emmy Award for his piece on Georgetown’s John Thompson for HBO/Real Sports.

Ever moving into new areas, Spike Lee has combined his extensive creative experience into yet another venture: partnering with DDB Needham, he created Spike/DDB, a full-service advertising agency.

When the Levees Broke

One year after Hurricane Katrina decimated New Orleans, director Spike Lee presents a four-hour, four-part chronicle recounting, through words and images, one of our country’s most profound natural disasters. In addition to revisiting the hours leading up to the arrival of Katrina, a Category 5 hurricane before it hit the coast of Louisiana, When the Levees Broke: A Requiem in Four Acts tells the personal stories of those who lived to tell about it, at the same time exploring the underbelly of a nation where the divide along race and class lines has never been more pronounced.

Spike Lee's 1991 story about an interracial relationship and its consequences on the lives and communities of the lovers is one of his most captivating and focused films. Snipes and Sciorra are very good as individuals trying to reach beyond the limits imposed upon them for reasons of race, tradition, sexism, and such. Lee makes an interesting and subtle case that they are driven to one another out of frustration with social obstacles as well as pure attraction--but is that enough for love to survive? John Turturro is featured in a subplot as an Italian American who grows attracted to a black woman and takes heat from his numbskull buddies.

Do The Right Thing

Spike Lee's incendiary look at race relations in America, circa 1989, is so colorful and exuberant for its first three-quarters that you can almost forget the terrible confrontation that the movie inexorably builds toward. Do the Right Thing is a joyful, tumultuous masterpiece--maybe the best film ever made about race in America, revealing racial prejudices and stereotypes in all their guises and demonstrating how a deadly riot can erupt out of a series of small misunderstandings. Set on one block in Bedford-Stuyvesant on the hottest day of the summer, the movie shows the whole spectrum of life in this neighborhood and then leaves it up to us to decide if, in the end, anybody actually does the "right thing."