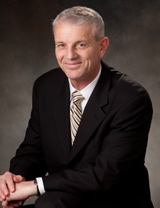 Stephen Harden is the CEO and co-founder of LifeWings Partners LLC – a team of physicians, astronauts, pilots, and nurses that have helped over 120 health care organizations in the U.S. and abroad implement the best safety practices from aviation and other high reliability industries. He has authored two books in patient safety including “CRM: The Flight Plan for Lasting Change in Patient Safety” published by HCPro. Results of his patient safety work have appeared in over 35 publications and news outlets.

Mr. Harden has been deeply involved in safety training for 20 years, producing over 40 separate training programs for commercial aviation, military flight squadrons, heavy construction, and health care. He is a certified TeamSTEPPSTM Master Trainer and has personally trained over 20,000 physicians, nurses, staff, and administrators in the last 10 years.

A professional pilot for 35 years, Stephen is a captain for a major international airline. His expertise in the field of aviation safety training has resulted in seven awards for superior performance and Quality Achievement. He also served as an adjunct instructor for the University of Southern California’s School of Aviation Safety.

Harden is a graduate of the United States Naval Academy. He accumulated 300 aircraft carrier landings during service with the U.S. Navy and was selected to be an instructor pilot at the Navy’s elite Fighter Weapons School (TOPGUN). He holds an Airline Transport Pilot rating and Type ratings in B-727, B-737, and MD-11 aircraft and has served as an FAA certified flight examiner.

Team training has become a tradition in healthcare, where it has helped produce significantly positive results in patient safety. It is widely acknowledged that medical teamwork is essential, yet the coordination, communication, and cooperation behind it has never been carefully examined. This book provides a comprehensive study of the science behind improving team performance in the delivery of clinical care. Leaders in the field, Eduardo Salas and Karen Frush, have assembled scholars, practitioners, and professionals to offer a combination of practical advice and insight as well as a look into the scientific foundation of teamwork. Chapters offer helpful guidelines and lessons on how to improve performance in the team setting, including how to measure success, how to monitor training, pitfalls and challenges, and how the different needs of various clinical situations.

Crew Resource Management: The Flightplan for Lasting Change in Patient Safety teaches you to train your staff in the CRM methodology, while providing all the safety tools necessary for implementation. This comprehensive, plain-English resource is an incredible value! The CRM model was founded to decrease negative outcomes in the airline industry and has been used successfully in a variety of sectors such as nuclear powered submarines, nuclear power plants, chemical manufacturing plants, and seaborne commercial shipping lines. Our unique team of aviation and healthcare expert authors F. Andrew Gaffney, MD, Rhea Seddon, MD, and Captain Stephen W. Harding will help your organization increase patient safety and turnaround time, improve communication within staff and among departments, gain leadership buy-in, and decrease negative outcomes and achieve overall improvement.

Never Go to the Hospital Alone...and other Insider secrets to get mistake-free health care from your doctor and hospital

"Never Go To the Hospital Alone...and other Insider secrets to get mistake-free health care from your doctor and hospital" is the most comprehensive book ever written to keep you and your family safe and help you avoid the risk of being the victim of a deadly medical mistake. Which Of These Expert Safety Tips Could You Use To Protect You and Your Family? • The most common medical mistake and when it is most likely to happen. • The hidden dangers of using a medical specialist. • Seven questions you should ask your new doctor during your first visit to the office. • How to use your health insurance plan to find a good doctor. • How to find and use a physician watchdog organization to double-check your doctor's qualifications. • What Google and other search engines can tell you about your doctor. • Six important things to look for in your doctor's office that will minimize the chance of medical mistakes. • What question good doctor's will ask you at the end of every office visit. • How most people pick a hospital and why this is dangerous. • How to find and interpret your hospital's public report card on safety. • Who you should call and what questions you should ask them before you ever check into a hospital. • Three reasons why getting care from a teaching hospital may not be your best choice for safety. • Five things you must tell your doctor during every visit. • What to do if your doctor doesn't like you and why this affects your safety. • Who should go with you every time you go to the hospital. With Never Go To the Hospital Alone, you'll get all of these tips, plus over 100 more proven, practical, easy-to-understand and use safety strategies guaranteed to reduce the risk of a potentially deadly medical mistake, every time you visit the doctor’s office or hospital. And it doesn't matter if you already have a doctor, or are looking for a doctor, live in a big city or a small one, go to the doctor a lot, or rarely get sick - the information in this book is priceless and once you know it, will instantly make your health care safer and less risky.