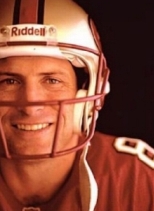 NFL Hall of Famer and former San Francisco 49ers All-Pro quarterback Steve Young, is a studio analyst on ESPN’s Monday Night Countdown. Steve Young, who retired from the league after 15 seasons in 1999, appeared on Sunday NFL Countdown during select weeks in 2000 and expanded to a full-time role at the start of the 2001 season.

Steve Young was inducted into the Pro Football Hall of Fame in August 2005. As the 49ers starting quarterback, he retired as the highest-rated quarterback in NFL history. He was the MVP of Super Bowl XXIX and the league’s MVP in 1992 and 1994, as well as a two-time 4,000-yard passer (1993 and 1998). Steve Young is also the only quarterback in league history to win four consecutive passing titles and to post six consecutive 300-yard passing games.

In addition, Steve Young is tied for the league record in highest completion percentage for a career (64.3%), most seasons leading the league in touchdown passes (four), and is second all-time with 20 consecutive passes completed. Steve Young is well-remembered for his exceptional footwork, which allowed him to rush for 4,239 career yards and 43 rushing touchdowns, while making some of the most electrifying runs by a quarterback in NFL history.

As a collegian, Steve Young, the great-great-great grandson of Brigham Young, was a consensus All-American and a Heisman Trophy runner-up at Brigham Young University in 1982. He received a degree in political science with a minor in finance in 1985, and returned to BYU, where he graduated from the school of law in 1994. In 2003, Young was inducted into the Academic All-America Hall of Fame.

In 1983, Steve Young was a first-round draft pick of the United States Football League’s Los Angeles Express. After two seasons with L.A., he was released from his contract and signed by the Tampa Bay Buccaneers. The 49ers signed him as a back-up quarterback to Joe Montana in 1987. He succeeded Montana as the starter from 1991 until his retirement in 1999. In all, Steve Young won three Super Bowl titles, two as a back-up and one as a starter when he threw a record six touchdowns in a 49-26 victory over the San Diego Chargers in Super Bowl XXIX.

San Francisco 49ers quarterback Steve Young tells kids to have confidence no matter what and to be ready to make the most of your chance when it comes. Steve encourages young readers to persevere through the tough times, and realize that it takes a team effort to be successful.