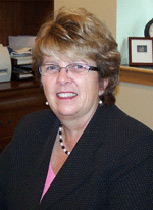 Susan A. Gendron served as Commissioner of Education for the state of Maine from March 13, 2003 until May 1, 2010 when she stepped down to assume the role of Policy Coordinator for the SMARTER Balance Assessment Consortium. In this role Susan A. Gendron assisted 31 states in preparing an innovative integrated proposal that is built upon an integrated balanced system for curriculum, assessment, instruction and educator development. On June 1, 2010 Sue was named a Senior Fellow for the International Center for Leadership in Education. In her role at the International Center, Sue leads a team of former state commissioners/superintendents to provide coaching and executive training and support to state education leaders and their staffs. She also leads the International Center’s consulting services to local districts and state education departments for development of comprehensive assessment systems and 21st century-based technology plans.

Gendron‘s career in education spans 38 years, serving as kindergarten teacher, primary school principal, high school principal, and assistant superintendent, and superintendent of schools in Windham, Maine, for many years. She has encouraged the expansion of public preschool programs in Maine and focused on working with school systems to move to a learner-centered system of standards-based education. She has worked with stakeholder groups to develop recommendations for a 21st century diploma. And as an early advocate of graduating all students ready for college, career and citizenship, she led Maine to become the first – and still only – state to use the SAT test as the state’s 11th grade assessment, part of her efforts to create a culture of higher aspirations and encourage post-secondary education for all students. She lead the implement of Maine’s reorganization effort of Maine’s school systems into fewer units, the largest education restructuring in the state in 50 years.

During Gendron‘s tenure, Maine joined with three other states to administer a common assessment for reading and mathematics. Commissioner Gendron expanded Maine’s laptop program, which has provided notebook computers to all Maine middle school students since 2002 – making Maine the first and only state with a statewide 1:1 computing program, making laptops a possibility for every student in grades 7-12. The high school expansion, announced in June 2009, marks the world’s largest educational technology program of its kind, once again putting Maine at the leading edge in using technology to support education.

Sue was a member of the Council of Chief State School Officers (CCSSO) Board from 2006-2010 and served as its President from 2009-2010. She held several leadership positions with CCSSO, including board liaison for the Education Information Management Advisory Consortium (EIMAC) and member of the Presidential Transition Task Force. Sue also served as Chair of the Regional Educational Laboratory Northeast and Islands (REL-NEI) Board, trustee of the University of Maine System, and serves on numerous other boards and commissions at the local, state, and national levels.