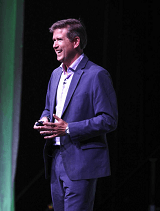 Tom is a frequent keynote speaker on innovation, marketing and creativity, using cartoons, case studies, and his marketing career to tell the story visually. The Huffington Post ranked his South-By-Southwest (SXSW) talk the third best of the conference out of 500. In October 2018, Tom spoke at the TED headquarters in New York on how humor can be a vehicle to talk about things that are otherwise hard to talk about. Tom gave a talk at the Do Lectures about pursuing a lifelong dream of becoming a cartoonist.

Tom started cartooning on the backs of business cases as a student at Harvard Business School. While in various marketing roles at General Mills, Nestle, Method and HotelTonight, Tom parodied the world of marketing in a weekly cartoon. From an email to 35 co-workers in 2002, his cartoons have grown by word of mouth to reach several hundred thousand readers each week and have been featured by the Wall Street Journal, Fast Company, Forbes, and the New York Times.

Tom soon realized that cartoons are a remarkable form of shareable media. In 2010, he launched Marketoonist to help large and small businesses such as Google, IBM, Kronos, and Unilever reach their audiences with cartoons.

Tom lives and draws near San Francisco with his wife and two daughters.

Your Ad Ignored Here: Cartoons from 15 Years of Marketing, Business, and Doodling in Meetings

From the birth of social media to digital advertising to personal branding, marketing has transformed in the past 15 years. Capturing these quintessential moments in marketing is Marketoonist, a popular cartoon series from veteran marketer Tom Fishburne. Your Ad Ignored Here collects nearly 200 of these hilarious and apt depictions of modern marketing life on the 15th anniversary of the series.

This One Time, at Brand Camp

The second collection (2008) from Tom Fishburne's Brand Camp series. Includes over 100 cheeky marketing cartoons from 2005 to 2008, complete with liner notes on each one, and a forward by Jackie Huba, co-author of "Creating Customer Evangelists." Brand Camp cartoons cover provocative business issues on marketing, innovation, sustainability, design, and management. First drawn on the backs of Harvard Business School cases as a popular student strip and later emailed to a handful of colleagues at General Mills, Brand Camp has grown by word-of-mouth to reach thousands of marketers each week and appears regularly in blogs, web sites, and publications such as Brandweek, Market Leader, and the Asian Wall Street Journal.