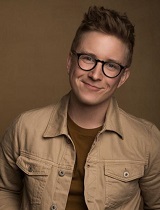 Tyler Oakley is an independent creator on YouTube, one of the largest digital platforms to date. With over 7.5M+ subscribers on YouTube and over 23M+ across his social media platforms, he has been established as one of the most influential LGBTQ+ vloggers and is an A-Lister in the digital age. Tyler’s videos are hilarious, engaging, and unapologetically personal. With an undying love for all things pop culture, his quick wit, and an innate sassiness, Tyler is immediately lovable and undeniably viral. Tyler and his best friend Korey Kuhl launched Psychobabble, a weekly podcast discussing “unfiltered gossip” and untold stories and it has gone to number one in the iTunes podcast chart, while the duo also placed 3rd on season 28 of The Amazing Race. He also completed 30 stops of his international Slumber Party themed tour, was on the New York Times Bestseller List for 11 consecutive weeks for his book Binge and released his much anticipated documentary, SNERVOUS.

Among his many accomplishments, Tyler has been a consultant for both the President and the First Lady of the United States on using digital platforms to connect with youth, raised over $1M for The Trevor Project, has been nominated and won Teen Choice Awards, Streamy Awards, Shorty Awards, and a Webby! With extensive experience hosting red carpets (i.e., Grammy Awards, the Vanity Fair Oscar Party, Kids Choice Awards, mtvU Fandom Awards), and hosting award shows (The Streamy Awards), he’s got plenty of behind-the-scenes Hollywood stories to share. Tyler was also named one of Time Magazine’s 30 Most Influential People on the Internet, was considered one of Time Magazine’s Next Generation Leaders, and was included in The Hollywood Reporter’s Top 25 Digital Stars list two years in a row and on this year’s Forbes 30 Under 30 list & OUT Magazine’s Power 50 list.