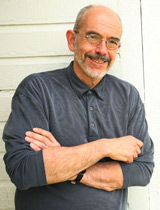 Wally Lamb is the critically acclaimed and beloved author of She’s Come Undone and I Know This Much Is True and the editor of Couldn’t Keep It To Myself and I’ll Fly Away, two volumes of writing from the writing workshop he runs at York Correctional Institution. Both of his novels were #1 New York Times best-sellers and Oprah’s Book Club selections. Lamb’s books are neither short nor simple, but like a James Patterson of emotions, he pulls readers in and doesn’t let go. His third New York Times best-seller, The Hour I First Believed (Harper), is a profound and challenging work of fiction, which has been hailed by critics across the country. Wally Lamb proves himself a virtuoso storyteller, assembling a variety of voices and an ensemble of characters rich enough to evoke all of humanity.

Wally Lamb contributes his time as a volunteer facilitator at York Correctional Institution, a women’s prison in Niantic, Connecticut. In 2003, Wally Lamb published the first collection of writings by the students at his writing workshop at the Institution in Couldn’t Keep It To Myself. Writing, Wally Lamb had found, was an unexpected and transforming way for these women to recapture their humanity and the hope that many of them had long since lost. The resulting collection offered a revealing window into the souls of once-powerless women, as they learned what it meant to gain control over their voices and, in many cases, their lives. The publication stirred controversy when the state of Connecticut attempted to sue the writers, but after 60 Minutes aired a piece celebrating the program, and one of the writers won a prestigious PEN/Newman’s Own First Amendment Award – the program and the book were vindicated.

Wally Lamb returned with I’ll Fly Away, a new volume of intimate, searching pieces from the York workshop. Here, in works of memoir, poetry, and introspection, 20 women, some of them familiar from Couldn’t Keep It To Myself, many heard here for the first time, share the experiences that shaped them from childhood, and that trouble and inspire them to this day. There are stories of anger, physical abuse, rape, and emotional distress, but also more positive memories: of expressions of love, of gifts received and remembered, of light moments from happier times. These portraits, vignettes, and stories are painted in many colors: innocence and pain, denial, redemption, and transcendence. At their heart, they all testify to the same core truth: the universal value of knowing oneself, and changing one’s life, through the power of the written word.

In this engaging first novel, narrator Dolores Price recounts her life story from age four to age 40. The troubled product of a stormy marriage, she is already sipping Maalox in grade school. Then her father walks out on her mother, who suffers a nervous collapse, and Dolores moves to her repressive grandmother's house in Rhode Island. By the time she reaches eighth grade, she has only one friend: a boarder who eventually rapes her. Anesthetizing herself with junk food and soap operas, Dolores becomes an obese, isolated young woman who attempts suicide during her first semester in college and spends seven years in a mental institution. Oddly enough, this relentless parade of disasters makes for interesting reading. The author keenly evokes his protagonist's profound alienation and self-loathing, endowing Dolores with a bleak sense of humor that keeps readers rooting for her. Ironically, the book itself "comes undone" as its heroine develops self-esteem, at which point an absorbing portrait of a woman on a collision course with her problems turns into a disappointing series of cliches about love, forgiveness and Dolores's ticking biological clock. Nonetheless, this is a promising debut.

I Know This Much Is True: A Novel

This much is true for sure: Lamb's second novel (after the bestselling, Oprah-selected She's Come Undone) is a hefty read. Some may be daunted by its length, its seemingly obsessive inclusion of background details and its many digressions. The topics it unflinchingly explores - mental illness, dysfunctional families, domestic abuse - are rendered with unsparing candor. But thanks to well-sustained dramatic tension, funky gallows humor and some shocking surprises, this sinuous story of one family's dark secrets and recurring patterns of behavior largely succeeds in its ambitious reach. The narrative explores the theme of sibling responsibility, depicting the moral and emotional conundrum of an identical twin whose love for his afflicted brother is mixed with resentment, bitterness and guilt. Narrator Dominick Birdsey, once a high-school history teacher and now, at 40, a housepainter in upstate Connecticut, relates the process that led to his twin Thomas's schizophrenic paranoia and the resulting chaos in both their lives. The book opens with a horrific scene in which Thomas slices off his right hand, declaring it a sacrifice demanded by God. Flashbacks illuminate the boys' difficult childhoods: illegitimate, they never knew their father; diffident, gentle Thomas was verbally and physically abused by their bullying stepfather, who also terrorized their ineffectual mother. Scenes from the pivotal summer of 1969, when Dominick betrayed Thomas and others in crucial ways, are juxtaposed with his current life: his frustrating relationship with his scatterbrained live-in, Joy; his enduring love for his ex-wife, Dessa; his memories of their baby's death and of his mother's sad and terrified existence. All of this unfolds against his urgent need to release Thomas from a mental institution and the psychiatric sessions that finally force Dominick to acknowledge his own self-destructive impulses. Lamb takes major risks in spreading his narrative over more than 900 pages. Long stretches are filled with the raunchy, foul-mouthed humor of teenaged Dominick and his friends. Yet the details of working-class life, particularly the prevalence of self-righteous male machismo and domestic brutality, ring absolutely true. Though the inclusion of a diary written by the twins' Sicilian immigrant grandfather may seem an unnecessary digression at first, its revelations add depth and texture to the narrative. Lastly, what seems a minor subplot turns out to hold the key to many secrets. In tracing Dominick's helplessness against the abuse of power on many levels, Lamb creates a nuanced picture of a flawed but decent man. And the questions that suspensefully permeate the novel - the identity of the twins' father; the mystery of the inscription on their grandfather's tomb; the likelihood of Dominick's reconciliation with his ex-wife - contribute to a fully developed and triumphantly resolved exploration of one man's suffering and redemption.

Couldn't Keep It to Myself: Testimonies from Our Imprisoned Sisters

A collection of heart-wrenching tales of abuse and violence from a writing class of women prisoners, edited by world-renowned no.1 New York Times bestselling author Wally Lamb. Wally Lamb's writing has been lauded around the world for its humanity and sensitivity to the plight of the outsider, the misunderstood figure who seeks hope and redemption. For the past several years, Lamb has devoted himself passionately to working with a group of incarcerated women at the York Correctional Institution. While at first the women distrusted Lamb, each other, and themselves, many of them began to slowly embrace the opportunity to join Lamb's writing class. Over time, they began to express themselves, and this book is the product of that journey into expression. Many of these women were imprisoned by their circumstances even before they came to York. Some women recount harrowing tales of chronic abuse and rejection by their families, their peers, and their societies. Brenda Medina joins a gang to fit in and to impress her volatile boyfriend, and violence soon ensues. Nancy Birkla is arrested for drug trafficking just when she has begun the painful ascent toward sobriety and toward facing her demons. Other tales give glimpses into life in jail. Robin Cullen writes about the difficulty of celebrating Christmas in a maximum-security prison where no care packages are allowed. Bonnie Foreshaw tells of how much she misses the music and joy of family gatherings. She still has much more time to serve of her forty-five year sentence for an accidental killing. The reader learns why some women turned to brutal violence, how others were caught in no-win situations, and how many of the women embrace hope even in the depths of their despair and loneliness. Wally Lamb's powerful introduction describes the incredible process by which these women found their true voices, and how they challenged him as a teacher and as a fellow writer: "I have come to know my current students not merely as the substance abusers, gang members, thieves, and killers they have been, but also as the complex and creative works in progress they are." Couldn't Keep It to Myself is a book about the hope and heartache of that process of finding onself and striving for a better day.

I'll Fly Away: Further Testimonies from the Women of York Prison (P.S.)

For several years, Wally Lamb, the author of two of the most beloved novels of our time, has run a writing workshop at the York Correctional Institution, Connecticut's only maximum-security prison for women. Writing, Lamb discovered, was a way for these women to face their fears and failures and begin to imagine better lives. Couldn't Keep It to Myself, a collection of their essays, was published in 2003 to great critical acclaim. With I'll Fly Away, Lamb offers readers a new volume of intimate pieces from the York workshop. Startling, heartbreaking, and inspiring, these stories are as varied as the individuals who wrote them, but each illuminates an important core truth: that a life can be altered through self-awareness and the power of the written word.