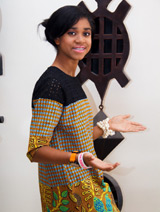 Probably The Most Incredible Child In The World Today

If anyone in the last 100 years brings new meaning to the phrase ‘age is just a number’, this young lady indeed does it so effortlessly, that she has got the global business and civil society talking.

ELLE Magazine named her in its prestigious list of “33 Women Who Changed The World” in 2015. Why is this list prestigious, well, it also has in it the Federal Reserve Bank Chairwoman Janet Yellen, the President of General Motors Mary Barra, and one of the most prolific producers of our time – ABC Producer Shonda Rhimes, creator of the hit TV shows Greys Anatomy and How To Get Away with Murder.

On January 6th 2017, she was honored at the US State Department in Washington DC by Secretary of State John Kerry, for her global work on Girls Education and Gender Development.

The Making of Zuriel – A Solid & Steady Journey

At age 10 in 2013, she became the youngest person in the world to be featured in the global and iconic business and wealth Forbes Magazine’s 97 year history. This was for her work in bringing the issues of Girls Education on the African continent to the forefront of the global debate of change, in line with the UN 2015 Millennium Development Goals.

Born in Los Angeles, Zuriel founded her Dream Up, Speak Up, Stand Up project in March 2013 to inspire young children globally to dream big, and reach higher. Along the way, she has spoken to more than 26,100 youths in 14 countries [the US, the UK, Nigeria, South Africa, Tanzania, Mauritius, Ghana, Malawi, Namibia, Kenya and Ethiopia] on education and its economic empowerment in just 2 years, the most by anyone under the age 40 in recent years.

To make her case, she has met with and personally spoken to in interview format with 27 President’s & Prime Ministers, including the leaders of Malta, Mozambique, Croatia, Nigeria, Jamaica, Tanzania, Liberia, Malawi, South Sudan, St Vincent & Grenadines, Cape Verde, Kenya, Mauritius, Malawi, Lesotho, and St Kitts & Nevis, in the Caribbean region.

New York’s Business Insider named her the Most Powerful 11 Year Old in the World in April 2014, in recognition of her exceptional ability in making her case, and commanding the attention of global political and business leaders.

As evidence of her reach and influence, she and her Foundation began giving an annual award to First Ladies and Gender Ministers on the African continent, to recognize measurable efforts towards children’s education. Since 2014, the awards have been won by the First Lady of Tanzania [2014], Kenya [2015], Namibia [2016], Senegal [2017] and Mozambique in 2018, as well as the Gender Ministers of Mauritius, Ghana and Rwanda.

A budding documentary film maker, she is on record as the youngest commercial film maker in the world today, writing, producing, editing and scoring her films, the last of which was released on the big screen in November 2014, and has showed in 5 countries on 3 continents – the UK, Ghana, South Africa, Nigeria, and Tokyo – Japan. Her newest film released in August 2017 was shot across 5 countries on 3 continents – Brazil, Ethiopia, Nigeria, Mauritius and the US.

In recognition of her global appeal and desirable media content drive, in the last 18 months, she has made extensive appearances on global TV networks such as the BBC in London, CNBC Power Lunch, Bloomberg TV, TRT World London, Chinas CCTV, and on CNN. She has literately been on every major relevant global TV network.

Zuriel has received the Governors Gold Coin Award, in recognition of her humanitarian services in the area of human development/girls education.

An inspiration to the young, old, business and political leaders alike as an example of what can be accomplished at an early age, she has been a guest and featured speaker at institutions across the globe, including Ashesi University in Ghana, Lagos Business School in Nigeria, University of Pretoria in South Africa, and in April 2015, at Columbia University’s Economic Forum in New York, where she spoke about the potentials and future of emerging markets and was a panelist as well.

In March 2018, she became the youngest guest speaker at the world famous Ron Clark Academy in Atlanta – Georgia, a few months after the school hosted another global speaker and personality – Ms Oprah Winfrey.

The Future for Zuriel

As of August 2019, she is 17, in the 12th grade [two years ahead of her age peers], and an English and Mandarin speaker. Zuriel hopes to be a leader in the field of Robotics engineering, but in the future, the President of the United States of America or the Secretary General of the United Nations [UN].

Many believe she is solidly, firmly, and well on her way!!