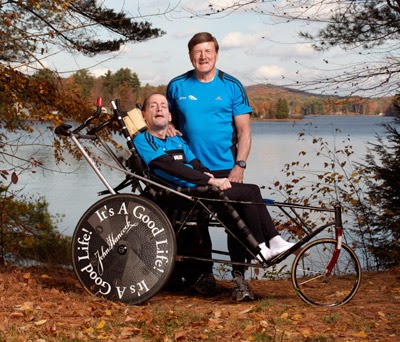 Dick Hoyt and his son, Rick Hoyt, are the father-son duo that make up “Team Hoyt.” Together they have competed in over 1075 athletic events in the last 33 years. With Dick pushing Rick in his wheelchair, they have competed in the Boston Marathon 31 times and in six Ironman Triathlons. In 2013, a statue of the Hoyts in front of Center School in Hopkinton, right by the start line of the Boston Marathon, was unveiled.
Dick, 73, is a retired Lt. Colonel, having served in the military for 35 years. Rick, 51, is a graduate of Boston University with a degree in Special Education. Rick was born in 1962 as a spastic quadriplegic with cerebral palsy and as a non-speaking person – but despite these disabilities, Rick’s mind and spirit have always been strong. In an interview with WBUR, Rick expressed his ideas using a recording of a computerized voice, saying, “Many people have asked me what I would do if I weren’t disabled. I have thought long and hard about what I would do if I weren’t in a wheelchair. Maybe I would play hockey, basketball or baseball. But then I thought about it some more and realized that what I would probably do first is tell my dad to sit down in the wheelchair, and now I would push him.”
Dick Hoyt travels the country doing corporate and community presentations, educating the public about disability awareness and promoting the Team Hoyt motto, “Yes You Can.” Through his presentation, Dick shares his lifelong commitment to changing attitudes and educating others on the world of disabilities. He and his family have seen an impact from their efforts in the area of public attitude toward people with disabilities.
April 21st will be Team Hoyt’s 32nd consecutive Boston Marathon race, as well as their last one. In an interview with CBS Boston, Rick Hoyt said, “Last year, we did not go across the finish line, we were stopped at the 25-mile marker. But we will be out there, we will get across it this year, it’s going to be very emotional.” Rick still has plans to participate in future Boston Marathons with other members of Team Hoyt pushing him forward. Dick still plans to run about 20 smaller races a year with Rick in the future.
No matter what they accomplish in the years to come, we know one thing’s for sure: they’ve had a great run.
For more information on all of our speakers, please visit us at AEISpeakers.com and follow us on Facebook and Twitter!