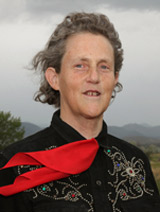 Temple Grandin‘s new book, Temple Talks about Autism and Sensory Issues: The World’s Leading Expert on Autism Shares Her Advice and Experiences, a Q&A style reference  to living with autism, is set to be released on April 4, 2015.

Temple Grandin has been a prolific speaker on the topic of autism. She has spoken for the National Autism Society and has even given a TED Talk. In 2010 she was named in Time Magazine’s 100 most influential people and has been a huge inspiration to many autistic people throughout the world. She has also worked as a professor in animal sciences at Colorado State University for more than two decades.

Temple used her experiences with coping with autism to create a humane system for cattle slaughter which is now used at half the cattle processing plants in the US. Grandin has described how animal’s emotions are very similar to those of autistic people: “This is another connection between autism and animals: autistic people have mostly simple emotions, too. That’s why normal people describe us as innocent. An autistic person’s feelings are direct and open, just like animal feelings. We don’t hide our feelings, and we aren’t ambivalent. I can’t even imagine what it would be like to have feelings of love and hate for the same person.”

National Autism Awareness Month is celebrated every April since the 1970s in the US and is a chance to educate the people on autism and issues faced within the autism community. Visit the Autism Society‘s website to find out more information on how you can get involved.