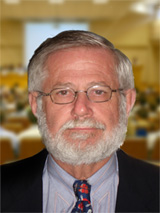 Aaron Beam is a popular, highly regarded speaker at universities, healthcare companies, auditor meetings and conventions, securities training seminars and ethics institutes across the U.S. He has spoken to student audiences as a guest lecturer at many business schools (Univ. of Chicago, LSU, UAB, Penn State, Stanford, Arizona State, and over fifty other schools) over the past four years.

Mr. Beam was the first CFO at Healthsouth Corp., and as a co-founder witnessed first-hand the series of accounting, stock manipulation and leadership failures that led Healthsouth to the $2B securities fraud scandal and ultimate prosecutions of Richard Scrushy. He relates to students and professionals the heights of success, followed by the unethical and illegal mistakes that led to his professional downfall. Serving three months in federal prison for his role in approving fraudulent quarterly numbers in 1996 and losing his CPA credentials, led Mr. Beam to his current speaking career; trying to make a positive difference by educating others about the pitfalls of unethical business practices. Through his Ethics First message he identifies early warning signs, influences and the bad choices he and others made at Healthsouth, allowing the audience to apply what they learn to their business practices and the organization’s culture and environment.

HealthSouth: The Wagon To Disaster

It was the quintessential American success story: Identify a niche; form a company to exploit it; raise millions in venture capital; take the concept public; meet stockholder expectations for 40 straight quarters, in the process becoming a darling of Wall Street; and of course make money plenty of it while the stock price steadily climbs and revenue projections increase. In a few short years you've gone from rags to riches...you're on a monster roll... Until your boss, saddled with the realization that the Street expectations cannot realistically be met, asks you to creatively fix the numbers. It's the toughest decision you've ever made, and one where the easiest way out could be the most difficult, given the circumstances. Caught squarely between greed and fear, Aaron Beam did the unthinkable.