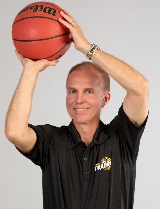 Since 2006, Coach Jim Johnson has taken his message of inspiration across the country. He has been sharing with all types of audiences that “Dreams Really Do Come True”. In his many appearances, the Rochester, New York resident relates his role in a basketball game that brought him calls from Hollywood to the White House. Coach Johnson has been delivering his presentations with compelling stories of life lessons in a heartfelt style that brings audiences to their feet.

To make the Hollywood ending complete, Greece Athena captured the first Section V title of Coach Johnson’s career a few weeks later. A second sectional crown followed in 2007, and Coach Johnson then coached the Trojans to their third straight league title in 2008 by posting a perfect 12-0 record in league play, netting Coach of the Year honors. His success continued in 2009 with a league co-championship (34-2 league record over a three-season stretch) and third sectional title in four years, with an overall record of 20-5, his first-ever trip to the state quarterfinals and more Coach of the Year accolades. In the reccently concluded 2012-2013 season, his Trojans won the sectional title for the fourth time in eight years.

In 2011, Coach’s book A Coach and a Miracle, Life Lessons from a Man who Believed in an Autistic Boy was published getting rave reviews from people like CBS sportscaster Jim Nantz and author, speaker and autism activist Temple Grandin.

Coach Johnson has rolled his accomplishments and experiences into a keynote titled “Dreams Really Do Come True.” In his presentations, Coach Johnson captivates his audiences with both heart-warming and entertaining stories about that magical season. He also shares his Six Essential Keys for making dreams come true. His essential keys guide his audiences to:

Coach Johnson illustrates each key with compelling stories and examples from the season and his own personal life. Coach Johnson is a voracious reader who has become an expert in leadership and team building.

A Coach and a Miracle: Life Lessons From a Man Who Believed in an Autistic Boy

During this era of war, economic crises and other woes, many folks may be wondering if miracles are still possible. In his new book A Coach and a Miracle: Life Lessons From a Man Who Believed in an Autistic Boy (Beacon Publishing), Coach Jim Johnson gives readers hope with a resounding "yes"-based on his own role in one of the past decade's most inspirational news stories that is observing its fifth anniversary. Flash back to February 15, 2006. As players and hundreds of basketball fans rushed the floor to engulf the smallest player, Coach Johnson remained rooted in place, still in shock over what he had just witnessed. He had inserted 5-foot-7-inch, 120-pound Jason McElwain in the fourth quarter of Greece Athena High School's final home game, as a show of appreciation for Jason's dedication as team manager. "J-Mac"-nicknamed as such by Coach Johnson-promptly poured in twenty points in the game's final 3:11. Even more shocking, Jason is autistic and learning disabled-and was playing in his first and only varsity game. This scoring outburst turned J-Mac and his coach into overnight celebrities. Coach Johnson calls it a modern-day miracle-a timeless, feel-good story that God wanted to share with the world. In A Coach and a Miracle, Coach Johnson offers behind-the-scenes looks at his role in helping J-Mac shed a lifetime of social isolation; internal team strife that nearly led to his resignation early in the 2005-06 season; his personal quest for a sectional title after several near-misses; and excerpts from hundreds of emotional letters he received-from parents of children with disabilities, to people in tough life circumstances who expressed how the miracle night gave them hope. Coach Johnson ties all these elements together by conveying vital life lessons on goal-setting, perseverance and teamwork. A Coach and a Miracle also offers exclusive reflections from some two dozen celebrities, including University of Florida Coach Billy Donovan who penned the foreword.