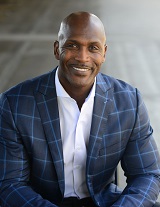 Eric Boles is President of “The GAMECHANGERS Inc,” a training and consulting company whose Leadership, Team and Personal development processes are used by some of the most recognized and successful companies in the world and have helped shape over a half a million successful leaders, managers and employees.

Prior to becoming an authority on teamwork, leadership and personal development, Eric learned many principles of team dynamics, leadership and peak performance from his experiences in the National Football League (NFL) with the New York Jets and Green Bay Packers.

Eric has presented throughout North America and Europe with audiences ranging from 5 to 20,000 people. From the boardrooms of some of our nation’s most prestigious Fortune 500 companies, to our Federal and State Governments, Academic Institutions, Professional Sports Franchises and Amateur Athletic Associations, Eric has earned the reputation as a dynamic presenter, facilitator, executive coach and friend.

Eric is married to his lovely wife Cindy and has 2 beautiful daughters, Taylor and Madison.

Moving to Great: Unleashing Your Best in Life and Work

Think of when you were at your best. Maybe you felt confident. Or powerful. Or passionate about life. What if you could be at your best more often? What if you could unleash the same power again and again? “Most of us get glimpses of the greatness within us,” says leadership expert Eric Boles, “but these glimpses are few and far between. Moving to Great offers a proven and powerful way to unleash our best, more of the time.”