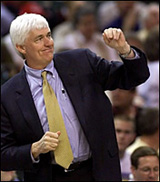 It’s hard to imagine Georgia Tech basketball before Bobby Cremins lifted the program from a 4-23 record to perennial national prominence, including the 1990 Atlantic Coast Conference championship and Tech’s first trip to the NCAA “Final Four.”

Tech has had a long and strong basketball tradition, particularly during the tenure of John “Whack” Hyder, but in the Institute’s entire history, only eight of its teams have been invited to the NCAA post-season tournament. Bobby Cremins has coached seven of them.

Only 11 times has Tech participated in post-season play, but in the last eight seasons under Cremins the Jackets have found themselves in either the NCAA Tournament or the NIT.

Again, Bobby Cremins has shown his coaching prowess in 1990-91 by guiding a young and inexperienced team to the big dance. Along the way, the Jackets beat North Carolina and Virginia on the road, in the same season, for the first time in school history. Tech also knocked off No. 6 ranked Arizona in the Meadowlands and captured the Sugar Bowl Tournament title with wins over Tulane and Villanova. In the NCAA Tournament, Tech won its first round matchup with DePaul.
With his veteran players sophomore All-American guard Kenny Anderson and All-ACC sophomore forward Malcolm Mackey, Cremins‘ squad has compiled a 17-13 mark against the nation’s fifth toughest schedule, according to the Sagarin Index.

This year the Jackets extended their school record number of consecutive winning seasons to eight. In addition, five of the eight Tech teams that have posted 10-win seasons have been led by the grey-haired mentor. Bobby Cremins currently is two wins shy of his 200th Tech victory and his 300th career victory.

Under Cremins, Tech has now had six All-Americans, 13 All-ACC players and six ACC “Rookie of the Year” picks. This year Anderson became only the second consensus first-team All-American in Tech history, along with Roger Kaiser in 1961. He was also a unanimous pick to the All-ACC team as a first-team selection, while Mackey made the second team in just his second season.

Six of Cremins‘ former players are now playing in the National Basketball Association including three first round draft choiced in Dennis Scott, John Salley and Tom Hammonds, while a Tech player has been drafted on the third round or higher in each of the last six years.

And, during the summer of 1989, he coached a U.S. squad to qualification for the 1990 World Games Championships.

He has been chosen by his peers – the Division I Head Coaches – as the top recruiter in the nation.

In 1989-90, Bobby Cremins became the second winningest basketball coach in Tech history, passing Roy Mundorf to trail only the highly-respected Hyder (292 victories). Cremins has managed 198 wins in his ten years on the Flats, an average of 19.8 victories a season. Hyder, by comparison, posted his 292 wins in 22 campaigns.

Because of the standard of success and excellence of his teams, Bobby Cremins is expected to yearly produce Top 20 teams that contend for the national championship. Pretty heady stuff for both Tech and the former South Carolina standout.

The 1989-90 team solidified Cremins‘ reputation as one of America’s best coaches as the Jackets compiled a 28-7 record, the most wins in school history, en route to an NCAA Tournament bid – its sixth straight. For his efforts last season, Bobby Cremins was named as the national “Coach of the Year” by the Naismith Awards Program. It marked the second time in his 15 year career that Bobby Cremins had won national coaching honors.

Tech also finished the year with its highest national ranking ever, third in the USA Today/CNN poll and second in The Sporting News’ poll, after losing to eventual champion UNLV in the national semifinals.

That Yellow Jacket edition, led by the “Lethal Weapon 3” combination of Brian Oliver, Dennis Scott and Kenny Anderson, roared off to a 10-1 start and climbed as high as sixth in the national polls. The Jackets were 13-0 in non-conference play and finished 8-6 in the tough ACC, tied for third place. In addition to downing Clemson, which finished first in the ACC regular season race, Tech defeated the champions of the Metro Conference in Louisville, the SEC in Georgia and the Atlantic 10 in Temple. Plus Tech beat Richmond, which captured the Colonial Athletic Conference tournament. Overall, Tech had an 8-2 slate against Top 20 opponents.

But the Jackets stuck another feather in their cap by opening this new decade as ACC Champions. Returning to the same city – Charlotte, NC, where Cremins had been a senior starter for South Carolina in the 1970 ACC title game – Cremins this time directed the Jackets to wins over NC State, Duke and Virginia to win the second league crown in school history, following the 1985 championship.

Perhaps the most telling statistic of the 1990 campaign was the fact that through Tech’s first 34 games its largest margin of defeat was only five points. And even in its national semifinal loss to powerful UNLV, Tech lost by only nine points.

But the 43-year old, silver-topped Cremins – basketball’s new Grey Fox – has accomplished far more than just creating a winning basketball program for one which had become moribund. He has turned on the entire city of Atlanta, the state of Georgia and an entire region to college basketball, and particularly to his Rambling Wreck club.

His accomplishments, achieved in such a short span of time, appear not quite possible at first glance. It took Bobby Cremins less than 48 months to guide Tech from a disastrous 4-23 record and a winless ACC chart to the championship of the Atlantic Coast Conference and a berth in the Final Eight in the 1985 NCAA Tournament.

One year later, he guided Tech to its best start ever (15-1), its best regular season record ever (23-5), another Top 10 regular season finish (6th), its highest (at the time) win total (27), tying the total set by the 1985 club, and its most ACC wins (11). Bobby Cremins took Tech to a berth in its second straight NCAA Tournament – first in school history – and a spot in the NCAA Final 16 for the second straight year. The Jackets accomplished all of this while facing the nation’s second toughest schedule, according to the Sagarin Index.

Rated in the pre-season as the nation’s No. 1 team, the Yellow Jackets spent the entire season, ranked among the nation’s Top 10, posing 24 consecutive weeks iwth America’s basketball elite, finishing sixth according to AP, UPI and USA Today. Tech’s post-season appearance was its third consecutive one, also a first.

Then, during the 1986-87 season, despite losing All-Americans Mark Price and John Salley, as well as facing the nation’s toughest schedule, Bobby Cremins guided the Yellow Jackets to their fourth consecutive winning season with a 16-13 mark. More importantly, Cremins led his squad to its third straight NCAA tournament berth and its fourth straight post-season invitation.

His 1987-88 club returned to the 10-win plateau, finishing with a 22-10 mark and ranked 18th in the country behind All-ACC performers, Hammonds and Duane Ferrell, plus Scott, the league’s “Rookie of the Year.” The 22 wins matched the fifth highest win total in Tech history. Tech advanced to the second round of the NCAA Tournament as the Jackets recorded their fifth straight winning season.

Cremins‘ 1988-89 team achieved national status as the Jackets landed their fifth straight NCAA Tournament bid and sixth consecutive post-season berth. Posting a 10-12 record, Tech upset a pair of Top 10 powers, knocking off ACC rivals North Carolina and Duke. The Jackets were ranked among the nation’s Top 25 teams through most of the season, climbing as high as 11th in the wire service polls in early December.

Cremins first burst onto the national scene guiding Tech in its spectacular 1985 campaign, in which the Yellow Jackets shattered records, tradition and precedent.
That year, Tech captured its first ACC Tournament Championship and a share of first place in the regular season, while recording the most wins (27-8) in school history. Never before in the ACC had a non-North Carolina team won both the regular season title and the tournament championship.

Not since 1974 had a team defeated national power North Carolina three times in a single season, and never in their history had the powerful Tar Heels been beaten thrice by a school outside of the state of North Carolina.

All throughout, Tech played to frenzied crowds in both the Omni and Alexander Memorial Coliseum as Cremins won acclaim from friend and foe alike.
In 1985 alone, Cremins was named ACC “Coach of the Year” by both the Atlantic Coast Sportswriters Association and the Associated Press. He was named National “Coach of the Year” by at least one publication – Basketball Times – and also by CBS-TV/Chevrolet and by Al McGuire’s NBC-TV special. The conference “Coach of the Year” citations were his fifth in ten years as a Head Coach. He was previously honored as the top coach in his conference in 1983 by the ACC and three times while in the Southern Conference at Appalachian State.

His first Tech contingent demonstrated the enthusiasm and intensity which has become a Yellow Jacket trademark in posting a 10-16 record during the 1981-82 season. His 1982-83 squad showed marked improvement, positng a 13-15 overall mark despite a starting lineup which included four freshmen.

Tech’s 1984 team recorded the first winning record in five years – an 18-11 mark – and earned a berth in the National Invitation Tournament (NIT), which, at the time, was only Tech’s fifth post-season invitation.

Jinx after jinx fell before the Yellow Jackets in 1985 and 1986, as Tech recorded wins at every city in the Atlantic Coast Conference, in wihich it had never won before. In 1985 and 1986, Tech received one of the top eight national seedings in the NCAA Tournament, seeded second in the Eat Regional behind Georgetown in 1985 and second in the Southeast behind Kentucky in 1986.