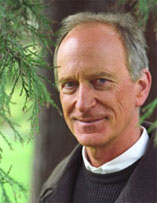 Denis Hayes directs The Bullitt Foundation from the perspective of a practical visionary who has devoted his life to conservation. Denis Hayes is probably still best known for having been National Coordinator of the first Earth Day when he was 25. But Denis Hayes also is the seasoned veteran of many environmental, legislative, and litigation victories over the years.

During the Carter Administration, Denis Hayes directed the federal National Renewable Energy Laboratory. He has been a visiting scholar at the Woodrow Wilson Center, a senior fellow at the Worldwatch Institute, an adjunct professor of engineering at Stanford University, and a Silicon Valley lawyer.

Internationally, he is recognized for expanding Earth Day to more than 180 nations. It is now the world’s most widely observed secular holiday.

Denis Hayes has received the national Jefferson Medal for Outstanding Public Service as well as the highest awards bestowed by the Sierra Club, The Humane Society of the United States, the National Wildlife Federation, the Natural Resources Council of America, the Global Environmental Facility of the World Bank, the interfaith Center for Corporate Responsibility, the American Solar Energy Society, and the Commonwealth Club. Time Magazine has named him as “Hero of the Planet.”

Denis Hayes has served on dozens of governing boards, including those of Stanford University, the World Resources Institute, the Federation of American Scientists, The Energy Foundation, Children Now, the National Programming Council for Public Television, the American Solar Energy Society, Greenpeace, CERES, and the Environmental Grantmakers Association. He continues to chair the board of the international Earth Day Network.

Mobilizing the resources of The Bullitt Foundation, Denis Hayes intends to make the Pacific Northwest – the best-educated, most environmentally aware, most progressive corner of America – a global model for sustainable development.