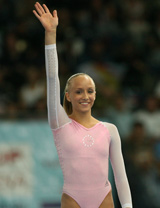 Winning 5 Olympic medals at the 2008 Beijing Olympics was only the beginning for Nastia. As the 28.7 million Americans who watched the Games know, Nastia parlayed her extraordinary athletic prowess into a Gold medal in all-around gymnastics, one of only three U.S. women ever to do so. Upon her return from Beijing, Nastia Liukin has become America’s sweetheart. Liukin also made the front of the iconic Wheaties cereal box, and has made several television appearances on TV programs including the hit show Gossip Girl, NBC’s Tonight Show with Jay Leno, HBO’s Costas NOW, and the Oprah Winfrey Show. Nastia Liukin is as talented as she is beautiful, and has appeared in Glamour Magazine as one of the “11 Greatest Bodies on Earth.”

Nastia has also transcended her life beyond the gym, transitioning from the balance beam to brand spokesperson. Her highly-respected athleticism and talents have won over audiences world wide, cementing her place in Olympic history. Nastia is a truly inspirational gymnast, model, actress, and role model.