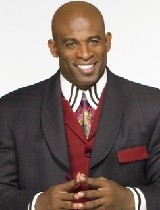 Deion Sanders, nicknamed “Prime Time” for his prowess on the field, is one of the rare athletes who found success in two major league sports: football and baseball.

Sanders currently stars in “Deion’s Family Playbook” on OWN: Oprah Winfrey Network. The series documents his daily life as a single father raising five kids of his own, while also helping to raise five other children who live with him. Sanders also serves as a NFL Network analyst providing his insight on “NFL GameDay Highlights” and “NFL GameDay Final.” For the 2014 season, he has joined CBS Sports’ “Thursday Night Football” coverage.

Inducted into the Pro Football Hall of Fame in 2011, Sanders played primarily at cornerback, but also was occasionally called on to play positions such as wide receiver, kick returner and punt returner. During his 14-year NFL career, Sanders played for the Atlanta Falcons, the Washington Redskins, and the Baltimore Ravens, as well as helping the San Francisco 49ers and the Dallas Cowboys each achieve a Super Bowl victory.

The only athlete to play in both the Super Bowl and the World Series, Sanders spent nine years playing baseball for the New York Yankees, the Atlanta Braves, the Cincinnati Reds and the San Francisco Giants. He attended Florida State University where he excelled in football, baseball, track and basketball.

Off the field, Sanders has dedicated his life to helping children by founding the Prime Time Association (also called TRUTH), a nonprofit organization that serves communities by teaching youth through sports and education. TRUTH has helped thousands of children in the Dallas area with its football summer camp and its baseball, football, soccer, cheerleading and track leagues.

In the fall of 2012, Sanders made another one of his dreams a reality when he opened Prime Prep Academy Charter School in the Dallas/Fort Worth area. With two campuses and no tuition costs, Prime Prep Academy provides hundreds of children in grades K-12 the best educational options without sacrificing the developmentally necessary support programs such as competitive athletics, fine arts and superior nutritional and physical educational programs.

Sanders and his family reside in Dallas, Texas.