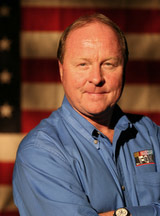 One of NASCAR’s most successful and recognized crew chiefs is
Larry McReynolds.

Larry’s NASCAR career began in 1975. Larry McReynolds worked his way up the ladder and took his first crew chief job in 1985. His first win as a crew chief was in 1988 at Watkins Glen with Ricky Rudd as the driver.

The combination in 1991 of Larry McReynolds, Robert Yates and driver Davey Allison was pure magic! Together they brought home 11 wins and 3 pole positions.

When teamed with driver Ernie Irvan in 1993, the two combined for 5 pole positions.

At the end of the 2000 NASCAR season, Larry McReynolds made the hard decision to leave the Richard Childress owned #31 Lowe’s Chevrolet and ventured into the Fox Sports broadcast booth with Mike Joy and three time Winston Cup champion Darrell Waltrip.

In 2008, eight years later, Larry found great joy as Race Analyst for the Nextel Cup races with FOX Sports during the first half of the race season and Turner Broadcast during the middle six races. For the final seventeen races, at select events, Larry McReynolds was a part of the broadcast team for the new DIRECTV HotPass program. His great talent has lead to more opportunities behind the mic with Speed Channel where he commentates weekly broadcasts of Cup and Busch Qualifying, the Trackside Show and NASCAR Performance.

In 2008, Larry McReynolds will be in his fifth year at MRN Radio, with co-host Steve Post, to bring the NASCAR Performance Show to the air on Wednesday evenings at 7:00pm EST.

And so Larry McReynolds continues another chapter in his storied career…………